Type 1 diabetes (T1D) is an autoimmune disease that is clinically silent until the majority of β cells are destroyed. There is an unmet need for reliable and cost-effective biomarkers to predict and diagnose diabetes at an early stage. A number of stable microRNAs (miRNAs) have been reported in serum and plasma and are now being investigated as biomarkers of different diseases. We measured the levels of 745 miRNAs in sera of children with recent-onset T1D and age-matched controls using locked nucleic acid–enhanced (LNA-enhanced) quantitative PCR profiling. Thirty-five miRNAs were significantly different between the groups, and 27 miRNAs were elevated in T1D. Good discriminating power was obtained for 6 miRNAs (miR-454-3p, miR-222-3p, miR-144-5p, miR-345-5p, miR-24-3p, and miR-140-5p), which were not elevated at later stages of diabetes. In silico pathway analysis, based on inferred miRNA target genes, associated glycosaminoglycan biosynthesis as well as PI3K/Akt, MAPK, and Wnt signaling pathways with early stages of T1D. Among the 27 upregulated miRNAs in T1D, 2 miRNAs significantly correlated with hemoglobin A1c (HbA1c), as did 5 of 8 downregulated miRNAs. A total of 134 miRNAs significantly correlated with HbA1c when stratifying hyperglycemia-induced miRNAs from T1D-specific miRNAs. In conclusion, we have identified a serum miRNA pattern of recent-onset T1D and signaling pathways that may be involved in its pathogenesis. 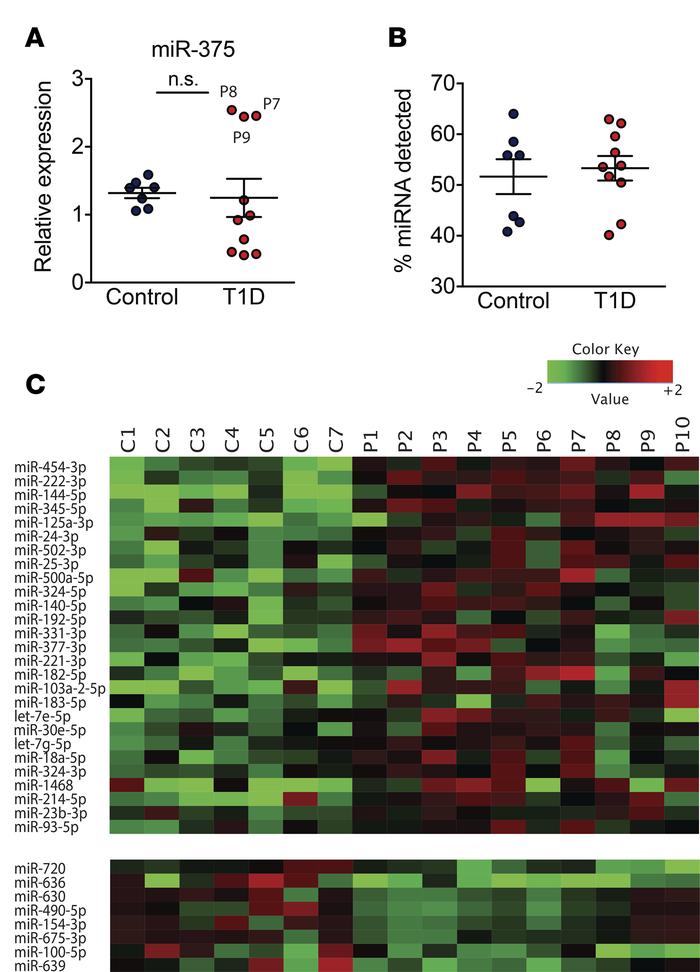