Bone remodeling is a highly coordinated process involving bone formation and resorption, and imbalance of this process results in osteoporosis. It has long been recognized that long-term heparin therapy often causes osteoporosis, suggesting that heparan sulfate (HS), the physiological counterpart of heparin, is somehow involved in bone mass regulation. The role of endogenous HS in adult bone, however, remains unclear. To determine the role of HS in bone homeostasis, we conditionally ablated Ext1, which encodes an essential glycosyltransferase for HS biosynthesis, in osteoblasts. Resultant conditional mutant mice developed severe osteopenia. Surprisingly, this phenotype is not due to impairment in bone formation but to enhancement of bone resorption. We show that osteoprotegerin (OPG), which is known as a soluble decoy receptor for RANKL, needs to be associated with the osteoblast surface in order to efficiently inhibit RANKL/RANK signaling and that HS serves as a cell surface binding partner for OPG in this context. We also show that bone mineral density is reduced in patients with multiple hereditary exostoses, a genetic bone disorder caused by heterozygous mutations of Ext1, suggesting that the mechanism revealed in this study may be relevant to low bone mass conditions in humans.

Heparan sulfate is required for functional presentation of osteoprotegerin on the surface of osteoblasts. 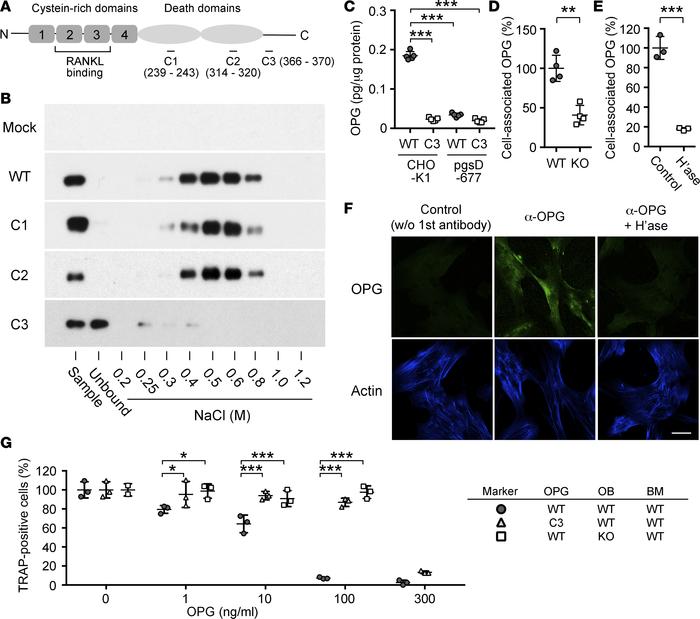 () Structure of osteoprotegerin (OPG) and point mutants generated in this study. The locations of the 3 basic clusters that were mutagenized (C1, C2, C3) are shown. () Heparin affinity chromatography of OPG mutants. There is essentially no binding of OPG-C3 to heparin, while OPG-C1 and OPG-C2 bind heparin as efficiently as OPG-WT. () Binding of OPG-WT and OPG-C3 to WT (CHO-K1) and HS-deficient (pgsD-677) CHO cells. Cell surface–bound OPG was quantified as described in Methods. () Association of endogenous OPG with the surface of WT and -null (KO) primary osteoblasts. () Effect of heparitinase treatment (H’ase) on the association of endogenous OPG with the surface of WT primary osteoblasts. () Cell surface localization of endogenous OPG in primary human osteoblasts. Cultures of human osteoblasts were double labeled with anti-OPG monoclonal antibody and SiR actin. Control, staining without primary antibody; αOPG, staining with anti-OPG monoclonal antibody; αOPG + H’ase, staining with anti-OPG monoclonal antibody after heparitinase treatment of cells. Scale bar: 10 μm. () HS binding is necessary for OPG to efficiently inhibit osteoclastogenesis. Cocultures of osteoblasts (OB) and bone marrow macrophages (BM) were prepared in the combination of two OPG forms (OPG-WT [WT] and OPG-C3 [C3]) and osteoblasts of two genotypes (WT and KO), as indicated in the marker table on the right, and emergence of TRAP-positive osteoclasts was quantitated. OPGs were added at 0, 1, 10, 100, and 300 ng/ml, as indicated. Results are shown as the percentage of TRAP-positive cells relative to the total number of cells. Note that little osteoclastogenesis-inhibitory activity is detected in the OPG-WT/-null osteoblast combination (squares) and the OPG-C3/WT osteoblast combination (triangles) at 100 ng/ml, while the OPG-WT/WT osteoblast combination shows a significant inhibitory effects in the range of 1–10 ng/ml and almost complete inhibition at 100 ng/ml (circles). Data represent the mean ± SD (number of cultures tested = 5 in , 4 in , and 3 in and ). * < 0.05, ** < 0.01, *** < 0.001 by Student’s test ( and ); 1-way factorial ANOVA and Bonferroni’s post-hoc multiple comparison test (); and 2-way factorial ANOVA and Tukey’s post-hoc multiple comparison test ().