von Willebrand disease type 2B (VWD-type 2B) is characterized by gain-of-function mutations of von Willebrand factor (vWF) that enhance its binding to platelet glycoprotein Ibα and alter the protein’s multimeric structure. Patients with VWD-type 2B display variable extents of bleeding associated with macrothrombocytopenia and sometimes with thrombopathy. Here, we addressed the molecular mechanism underlying the severe macrothrombocytopenia both in a knockin murine model for VWD-type 2B by introducing the p.V1316M mutation in the murine gene and in a patient bearing this mutation. We provide evidence of a profound defect in megakaryocyte (MK) function since: (a) the extent of proplatelet formation was drastically decreased in 2B MKs, with thick proplatelet extensions and large swellings; and (b) 2B MKs presented actin disorganization that was controlled by upregulation of the RhoA/LIM kinase (LIMK)/cofilin pathway. In vitro and in vivo inhibition of the LIMK/cofilin signaling pathway rescued actin turnover and restored normal proplatelet formation, platelet count, and platelet size. These data indicate, to our knowledge for the first time, that the severe macrothrombocytopenia in VWD-type 2B p.V1316M is due to an MK dysfunction that originates from a constitutive activation of the RhoA/LIMK/cofilin pathway and actin disorganization. This suggests a potentially new function of vWF during platelet formation that involves regulation of actin dynamics. 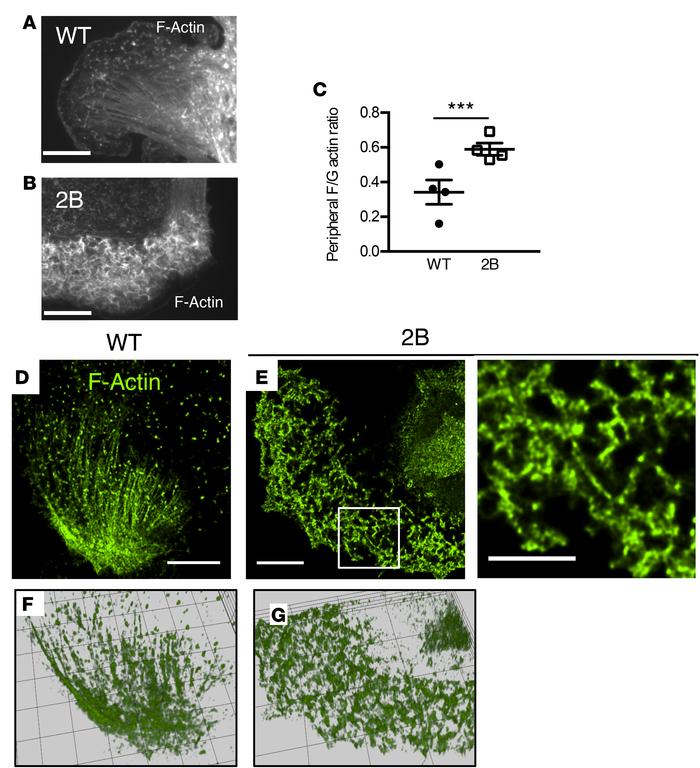 ( and ) Mature MKs after thrombopoietin-induced differentiation in culture were incubated over a fibrinogen matrix for 3 hours. Representative images of the actin structure of WT () and 2B MKs (). Scale bars: 20 μm. () Quantification of the F/G-actin integrated intensity in the peripheral zone of 4 separate experiments. Statistical significance was determined by Student’s test (20–45 MKs were analyzed/experiment). *** < 0.001. ( and ) Confocal microscopy images of F-actin structure in WT () and 2B MKs (). One image of the z-stack is presented. Scale bars: 10 μm. White squares indicate the magnification zone in 2B MKs (right). ( and ) The complete z-stacks are represented as a 3D-volumetric reconstruction using Icy software. , WT; , 2B.