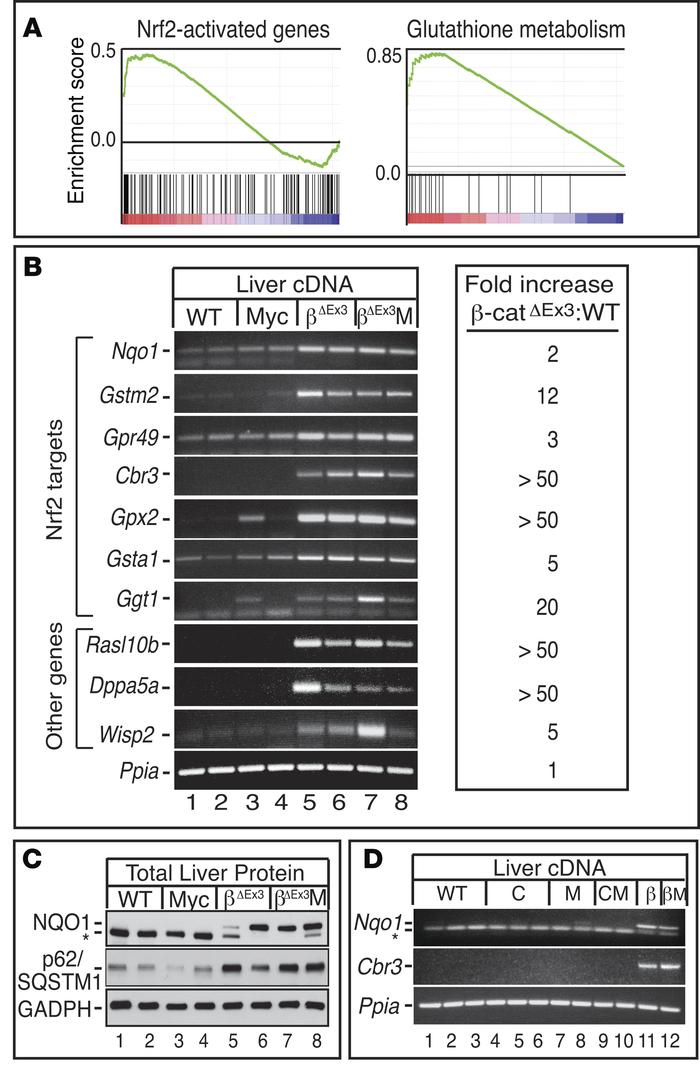 () Gene set enrichment analysis (GSEA) of β-catenin–regulated genes using gene sets consisting of previously annotated Nrf2 target genes and genes linked to glutathione metabolism. () Semiquantitative (Sq) RT-PCR of β-catenin–regulated Nrf2 target genes and other genes identified by array. mRNAs are elevated in livers expressing β-catenin (lanes 5–8) and are independent of Albumin-c-Myc transgene status. () Western blot analysis of NQO1 and p62/SQSTM1 expression in livers of WT (lanes 1 and 2), Alb-c-Myc (lanes 3 and 4), β-catΔEx3 (lanes 5 and 6), and β-catΔEx3:Myc (lanes 7 and 8) mice. In , the asterisk denotes a lower molecular weight nonspecific band. () Sq RT-PCR showing that induction of the Nrf2 mRNA targets and and is solely a function of mutant β-catenin expression (lanes 11 and 12) and that expression of Cre recombinase, either by itself (lanes 4–6) or in combination with the Alb-c-Myc transgene (lanes 9 and 10), does not induce Nrf2 target gene expression. In , the 85bp Nqo1 amplicon migrates just above the excess primers in the PCR reaction, denoted by the asterisk. C, Alb-Cre mice; M, Alb-c-Myc mice; CM, Alb-Cre:Alb-c-Myc bitransgenic mice; β, β-catΔEx3:Alb-Cre mice; βM, β-catΔEx3:Alb-Cre:Alb-c-Myc mice.