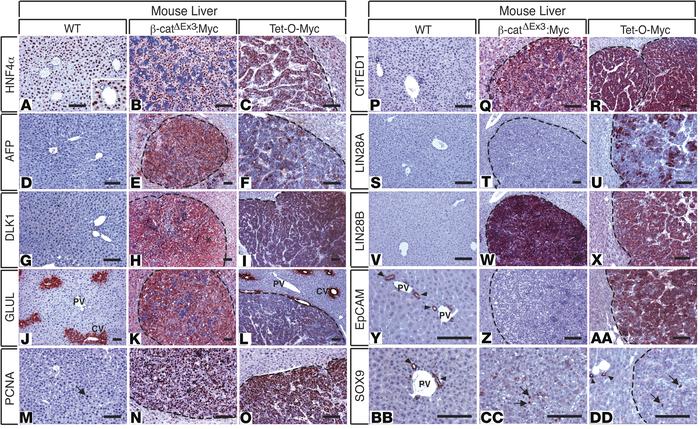 Photomicrographs of immunohistochemistry (IHC) of WT livers and tumor-bearing livers of β-catΔEx3:Myc and Tet-O-Myc mice with antibodies specific for (–) HNF4α, (–) AFP, (–) DLK1, (–) GLUL, (–) PCNA, (–) CITED1, (–) LIN28A, (–) LIN28B, (–) EpCAM, and (–) SOX9. Hepatoblastomas (HBs) from both strains express the oncofetal genes AFP, DLK1, CITED1, and LIN28B but lack expression of SOX9 in all but a few tumor cells (arrows in and ). Only embryonal HBs originating in Tet-O-Myc mice express LIN28A and EpCAM. Expression of AFP and GLUL in fetal HBs from β-catΔEx3:Myc mice is higher than in HBs from Tet-O-Myc mice, consistent with a higher degree of tumor cell differentiation in the fetal HBs. Note pericentral-restricted expression of GLUL (glutamine synthetase) in () normal and () tumor-adjacent liver in Tet-O-Myc mice, indicating maintenance of normal hepatic architecture and zonation in nontumorous liver. The arrow in highlights a solitary PCNA-positive hepatocyte in liver from a WT mouse, in contrast to an abundance of PCNA-positive cells in HBs ( and ). Arrowheads in , , and indicate EpCAM-positive or SOX9-positive bile ducts in WT liver, respectively. PV, portal vein; CV, central vein. Dashed lines demarcate tumor boundaries. AEC chromagen (red), hematoxylin counterstain (blue). Scale bar: 50 μm. Original magnification for inset in , ×240.