Expression of mutant β-catenin coincides with 2 temporally distinct pools of Myc in livers of β-catΔEx3 mice. 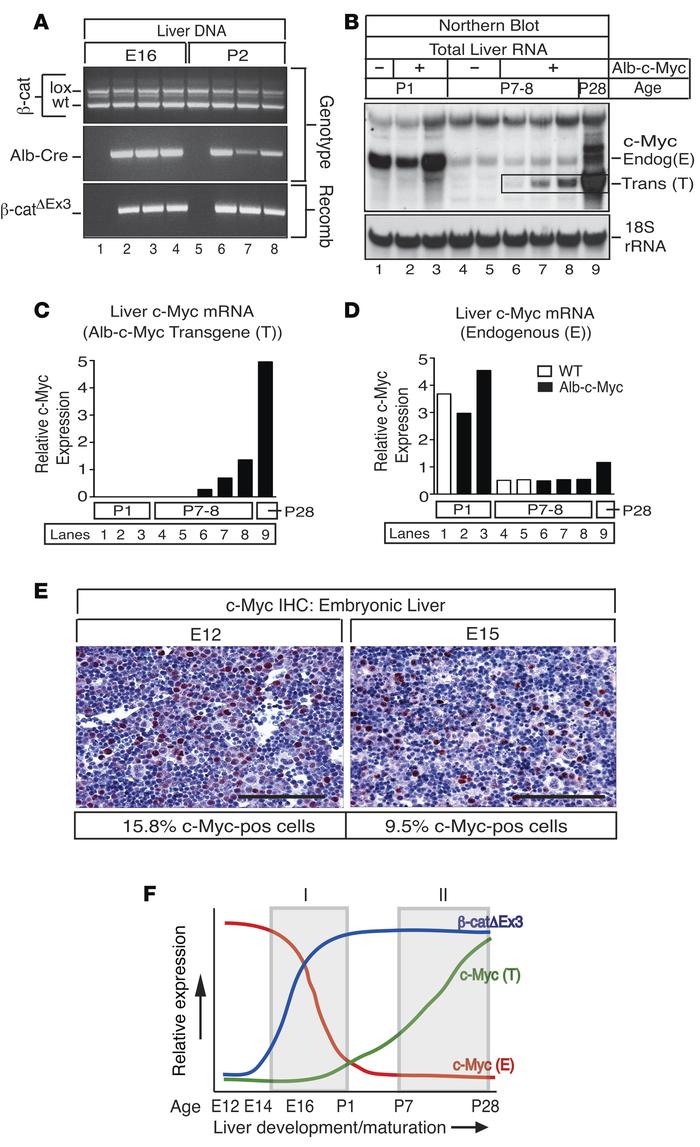 () Cre-mediated recombination of exon 3–deficient β-catenin (β-catΔEx3) is evident in the liver by E16. PCR analysis of DNA isolated from embryonic (E16) and postnatal (P2) livers of β-catΔEx3:Alb-Cre– mice (lanes 1 and 5) ( = 1 each time point) and β-catΔEx3:Alb-Cre+ mice (lanes 2–4 and 6–8) ( = 3 each time point) using genotype- or recombination-specific primers. Recombination is evident only in livers expressing the Alb-Cre transgene (lanes 2–4 and 6–8). () Northern blot analysis of endogenous c-Myc mRNA and c-Myc mRNA produced from the Albumin-c-Myc transgene (bounded by black box) in livers of WT and Alb-c-Myc mice. 12 μg of total RNA isolated from livers of WT (lanes 1, 4, and 5) and Alb-c-Myc mice (lanes 2, 3, 6, 7, and 8) at P1 ( = 3), P7–P8 ( = 5), and P28 ( = 1) (lane 9) was gel-fractionated, transferred to a nylon membrane, and hybridized to a radiolabeled c-Myc–specific probe and, thereafter, a radiolabeled oligonucleotide probe specific for 18s rRNA. Endogenous c-Myc mRNA is abundantly expressed at P1 in WT and Alb-c-Myc mice (lanes 1–3) but is negligible by P7–P8 (lanes 4–8). In contrast, the Albumin-c-Myc transgene is expressed by P7–P8 and continues to increase as the liver matures (lanes 6–9, bounded by box, and ). () Quantitation of transgenic (T) and () endogenous (E) c-Myc mRNA showing relative c-Myc mRNA expression in postnatal liver. Lanes correspond to Northern blot in . () Immunohistochemistry (IHC) of Myc in embryonic liver at E12 and E15. Approximately 16% of cells at E12 and approximately 10% of cells at E15 express Myc. (AEC chromagen [red], hematoxylin counterstain [blue]). Scale bar: 50 μm. () Scheme depicting the relative magnitude and temporal-dependent expression of mutant β-catenin relative to endogenous and transgenic c-Myc in β-catΔEx3:Myc mice during liver development and maturation. Mutant β-catenin coincides with a pool of hepatoblast-expressed endogenous c-Myc from approximately E16–P2 (gray box I) and a pool of c-Myc expressed from the Albumin-c-Myc transgene in maturing hepatocytes from approximately P7 onward (gray box II).