Hepatic expression of mutant β-catenin retards growth and cooperates with Myc to promote HBs and HCCs in neonatal mice. 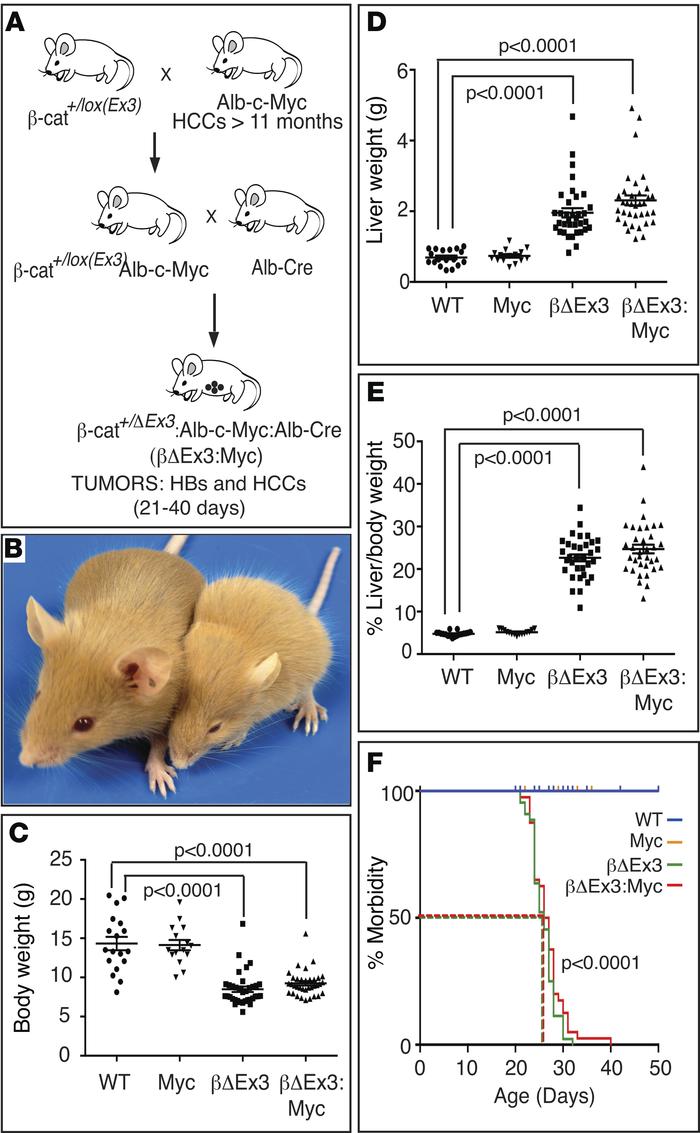 () Breeding strategy used to generate β-catΔEx3:Myc (here abbreviated to βΔEx3:Myc) mice coexpressing mutant β-catenin and Myc in the immature liver. ( and ) Hepatic expression of mutant β-catenin stunts postnatal growth. () Left, normal sized WT mouse; right, small mouse expressing a single copy of the β-catΔEx3 allele (here abbreviated to βΔEx3) in liver. () Body weights. ( and ) Expression of mutant β-catenin with or without the Albumin-c-Myc transgene induces hepatomegaly. () Liver weights and () percentage of liver/body weight. () Kaplan-Meier curve of morbidity. Number of mice analyzed to generate graphs in –: WT ( = 18); Myc ( = 15); βΔEx3 ( = 35); and βΔEx3:Myc ( = 35). Number of mice analyzed to generate the graph in : WT ( = 19); Myc ( = 19); βΔEx3 ( = 44); and βΔEx3:Myc ( = 40). Dashed lines in graph in indicate the age at which 50% of βΔEx3 and βΔEx3:Myc mice became premorbid, 26 days and 26.5 days, respectively. values for graphs in – were generated using a 2-tailed unpaired test. values for graph in were generated using a log-rank (Mantel-Cox) test.