Primary pigmented nodular adrenocortical disease (PPNAD) is a rare cause of ACTH-independent hypercortisolism. The disease is primarily caused by germline mutations of the protein kinase A (PKA) regulatory subunit 1A () gene, which induces constitutive activation of PKA in adrenocortical cells. Hypercortisolism is thought to result from PKA hyperactivity, but PPNAD tissues exhibit features of neuroendocrine differentiation, which may lead to stimulation of steroidogenesis by abnormally expressed neurotransmitters. We hypothesized that serotonin (5-HT) may participate in the pathophysiology of PPNAD-associated hypercortisolism. We show that PPNAD tissues overexpress the 5-HT synthesizing enzyme tryptophan hydroxylase type 2 (Tph2) and the serotonin receptors types 4, 6, and 7, leading to formation of an illicit stimulatory serotonergic loop whose pharmacological inhibition in vitro decreases cortisol production. In the human PPNAD cell line CAR47, the PKA inhibitor H-89 decreases 5-HT4 and 5-HT7 receptor expression. Moreover, in the human adrenocortical cell line H295R, inhibition of expression increases the expression of Tph2 and 5-HT4/6/7 receptors, an effect that is blocked by H-89. These findings show that the serotonergic process observed in PPNAD tissues results from PKA activation by mutations. They also suggest that Tph inhibitors may represent efficient treatments of hypercortisolism in patients with PPNAD. 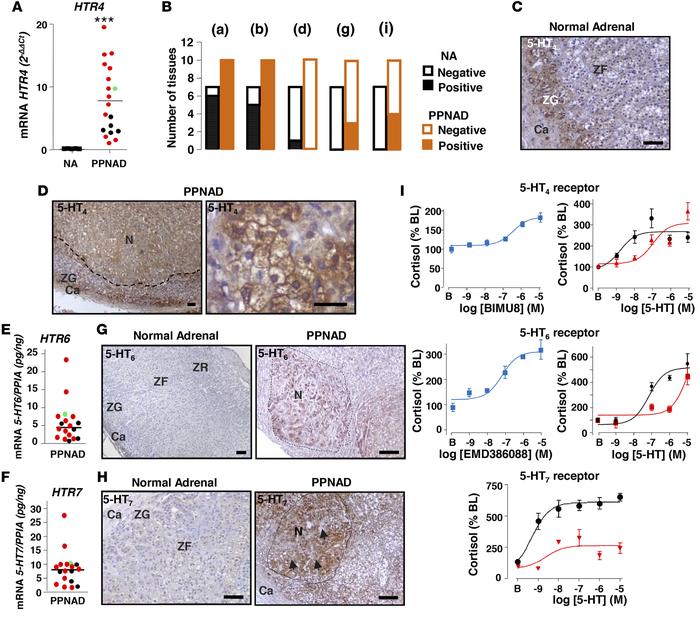