Anti-neutrophil cytoplasmic antibody (ANCA) vasculitis is characterized by the presence of autoantibodies to myeloperoxidase and proteinase-3, which bind monocytes in addition to neutrophils. While a pathological effect on neutrophils is acknowledged, the impact of ANCA on monocyte function is less well understood. Using IgG from patients we investigated the effect of these autoantibodies on monocytes and found that anti-myeloperoxidase antibodies (MPO-ANCA) reduced both IL-10 and IL-6 secretion in response to LPS. This reduction in IL-10 and IL-6 depended on Fc receptors and enzymatic myeloperoxidase and was accompanied by a significant reduction in TLR-driven signaling pathways. Aligning with changes in TLR signals, oxidized phospholipids, which function as TLR4 antagonists, were increased in monocytes in the presence of MPO-ANCA. We further observed that MPO-ANCA increased monocyte survival and differentiation to macrophages by stimulating CSF-1 production. However, this was independent of myeloperoxidase enzymatic activity and TLR signaling. Macrophages differentiated in the presence of MPO-ANCA secreted more TGF-β and further promoted the development of IL-10– and TGF-β–secreting CD4+ T cells. Thus, MPO-ANCA may promote inflammation by reducing the secretion of antiinflammatory IL-10 from monocytes, and MPO-ANCA can alter the development of macrophages and T cells to potentially promote fibrosis.

MPO-ANCA decreases IL-10 and IL-6 production from monocytes in response to LPS. 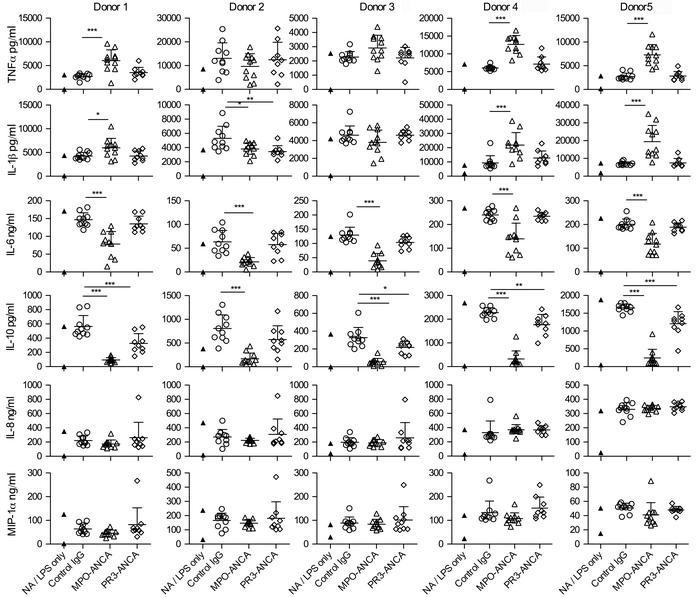 Cytokine production from peripheral blood monocytes incubated for 18 hours with 100 ng/ml LPS and anti-myeloperoxidase antibodies (MPO-ANCA), anti–proteinase-3 antibodies (PR3-ANCA), or control IgG ( = 9–11 of each type). Experiments were performed in 5 different healthy monocyte donors. Not activated (NA; no LPS) and LPS-only treated cells are shown in the same column, with the LPS-only data being the higher point in all cases. All other groups contained LPS in addition to the stated type of IgG preparation. * < 0.05, ** < 0.01, *** < 0.001 by 1-way ANOVA and Dunnett’s post-test with control IgG as the control group. Error bars represent mean ± SEM. For a given monocyte donor, is the number of IgG preparations from different individuals. They are not technical replicates or repeated measures of the same IgG samples.