Cancer testis antigens (CTAs) are of clinical interest as biomarkers and present valuable targets for immunotherapy. To comprehensively characterize the CTA landscape of non–small-cell lung cancer (NSCLC), we compared RNAseq data from 199 NSCLC tissues to the normal transcriptome of 142 samples from 32 different normal organs. Of 232 CTAs currently annotated in the Caner Testis Database (CTdatabase), 96 were confirmed in NSCLC. To obtain an unbiased CTA profile of NSCLC, we applied stringent criteria on our RNAseq data set and defined 90 genes as CTAs, of which 55 genes were not annotated in the CTdatabase, thus representing potential new CTAs. Cluster analysis revealed that CTA expression is histology dependent and concurrent expression is common. IHC confirmed tissue-specific protein expression of selected new CTAs (TKTL1, TGIF2LX, VCX, and CXORF67). Furthermore, methylation was identified as a regulatory mechanism of CTA expression based on independent data from The Cancer Genome Atlas. The proposed prognostic impact of CTAs in lung cancer was not confirmed, neither in our RNAseq cohort nor in an independent meta-analysis of 1,117 NSCLC cases. In summary, we defined a set of 90 reliable CTAs, including information on protein expression, methylation, and survival association. The detailed RNAseq catalog can guide biomarker studies and efforts to identify targets for immunotherapeutic strategies. 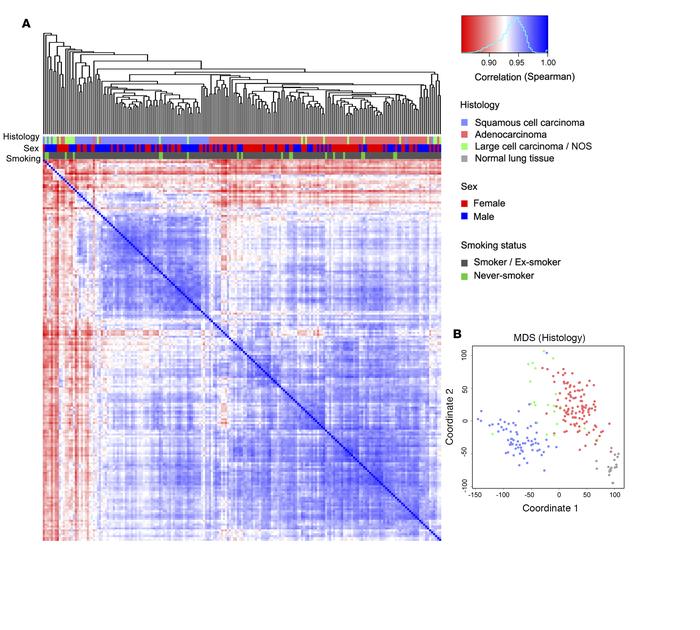 () Hierarchical cluster analysis demonstrating the pair-wise correlation between all 199 NSCLC cases based on mRNA expression of 20,293 putative protein-coding genes (Ensembl v.73). () Multidimensional scaling (MDS) plot with regard to histology showing the level of similarity of the 199 NSCLC cases analyzed as well as of 19 normal lung samples. NOS, not otherwise specified.