Successful induction of allograft tolerance has been achieved in nonhuman primates (NHPs) and humans via induction of transient hematopoietic chimerism. Since allograft tolerance was achieved in these recipients without durable chimerism, peripheral mechanisms are postulated to play a major role. Here, we report our studies of T cell immunity in NHP recipients that achieved long-term tolerance versus those that rejected the allograft (AR). All kidney, heart, and lung transplant recipients underwent simultaneous or delayed donor bone marrow transplantation (DBMT) following conditioning with a nonmyeloablative regimen. After DBMT, mixed lymphocyte culture with CFSE consistently revealed donor-specific loss of CD8+ T cell responses in tolerant (TOL) recipients, while marked CD4+ T cell proliferation in response to donor antigens was found to persist. Interestingly, a significant proportion of the proliferated CD4+ cells were FOXP3+ in TOL recipients, but not in AR or naive NHPs. In TOL recipients, CD4+FOXP3+ cell proliferation against donor antigens was greater than that observed against third-party antigens. Finally, the expanded Tregs appeared to be induced Tregs (iTregs) that were converted from non-Tregs. These data provide support for the hypothesis that specific induction of iTregs by donor antigens is key to long-term allograft tolerance induced by transient mixed chimerism. 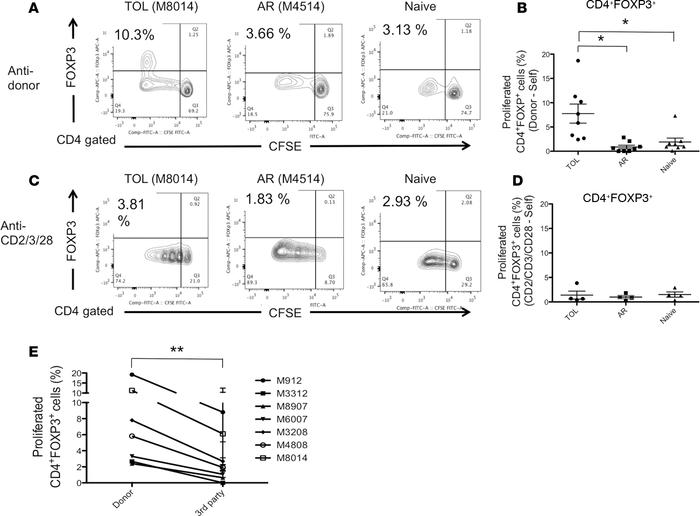 CD3+ cells isolated from tolerant (TOL), acutely rejected (AR), and naive nonhuman primates (NHPs) were labeled with CFSE and were cultured with irradiated self, donor cells, or anti-CD2/CD3/CD28 mAbs for 5 days. Naive T cells were cultured with irradiated MHC-mismatched peripheral blood lymphocytes (PBLs). Cultured cells were then stained for CD4 and FOXP3. Representative flow cytometric data ( anti-donor; , anti-CD2/CD3/CD28) and mean of % proliferation relative to the response to the self (, anti-donor; , anti-CD2/CD3/CD28) are shown. Among these proliferated CD4+ cells after donor antigen stimulation, a significant proportion of proliferating CD4+ cells was FOXP3+ in TOL, while such FOXP3+ cell proliferation was minimal in the AR and naive monkeys ( and ). This Treg expansion appeared alloantigen specific as Treg expansion was not observed by polyclonal stimulation with anti-CD2/CD3/CD28 mAbs ( and ). To examine whether Treg expansion is a donor-specific response, CFSE-labeled recipient PBLs from the TOL recipients ( = 7) were cultured with self, donor, and multiple third-party cells for 5 days, after which cultured cells were stained with FOXP3. Significantly greater FOXP3+ cell proliferation was observed after MLC with the donor PBLs than following stimulation with third-party PBLs (). Proliferated cells (%) = proliferated cells (%) with donor, third-party antigens or anti-CD2/CD3/CD28 mAbs – proliferated cells (%) with the self. These assays were performed at 520 ± 86 days in TOL recipients and 175 ± 37 days in AR recipients after bone marrow transplantation. Data are presented as the mean ± SEM. * < 0.05, ANOVA and the Bonferroni multiple-comparison method was used to test for significant differences among 3 groups; = 8 (anti-donor) and = 4 (anti-CD2/CD3/CD28 mAbs) per group. ** < 0.001, = 7. For analysis of the donor-antigen specificity of Treg expansion, we conducted a 2-way ANOVA with factors of animal (experimental unit) and source of cell (donor or third parties).