The 2p15p16.1 microdeletion syndrome has a core phenotype consisting of intellectual disability, microcephaly, hypotonia, delayed growth, common craniofacial features, and digital anomalies. So far, more than 20 cases of 2p15p16.1 microdeletion syndrome have been reported in the literature; however, the size of the deletions and their breakpoints vary, making it difficult to identify the candidate genes. Recent reports pointed to 4 genes (, , , and ) that were included, alone or in combination, in the smallest deletions causing the syndrome. Here, we describe 8 new patients with the 2p15p16.1 deletion and review all published cases to date. We demonstrate functional deficits for the above 4 candidate genes using patients’ lymphoblast cell lines (LCLs) and knockdown of their orthologs in zebrafish. All genes were dosage sensitive on the basis of reduced protein expression in LCLs. In addition, deletion of , a nuclear exporter, cosegregated with nuclear accumulation of one of its cargo molecules (rpS5) in patients’ LCLs. Other pathways associated with these genes (e.g., NF-κB and Wnt signaling as well as the DNA damage response) were not impaired in patients’ LCLs. Knockdown of , , , and resulted in abnormal zebrafish embryonic development including microcephaly, dysmorphic body, hindered growth, and small fins as well as structural brain abnormalities. Our multifaceted analysis strongly implicates , , and as candidate genes for 2p15p16.1 microdeletion syndrome. 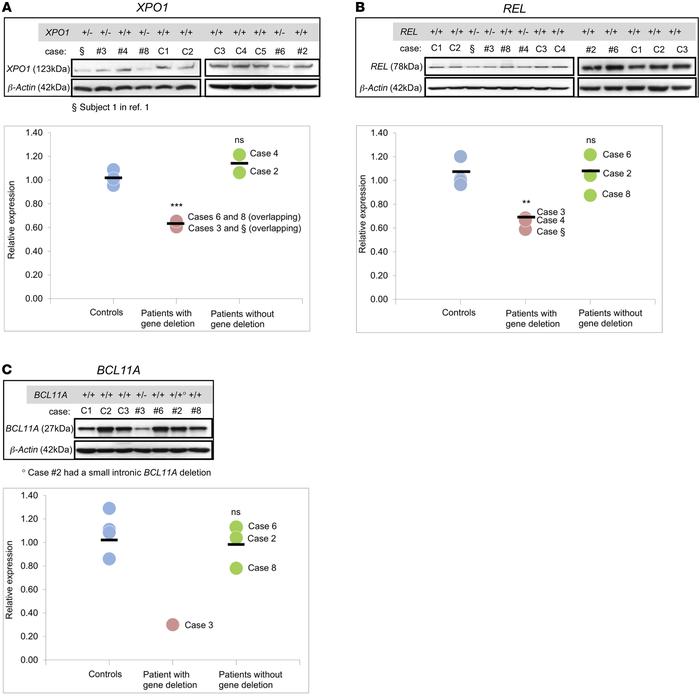 Expression of () XPO1, () REL, and () BCL11A was analyzed in the lymphoblast cell lines (LCLs) from patients (with and without gene deletions) and controls by Western blotting, and the subsequent quantitative measurement of protein density was done using GeneSnap image acquisition software (Syngene). Each data point represents the average of the ratios of normalized protein density compared with the internal loading control from independent biological replicates ( = 3 per individual). *** < 0.001; ** < 0.01; and NS = > 0.05, by 2-tailed Student’s test. §, Subject 1 in ref. . #, case (patient) number. C1, control 1, etc.