Development of novel treatments for lymphedema has been limited by the fact that the pathophysiology of this disease is poorly understood. It remains unknown, for example, why limb swelling resulting from surgical injury resolves initially, but recurs in some cases months or years later. Finding answers for these basic questions has been hampered by the lack of adequate animal models. In the current study, we used mice that expressed the human diphtheria toxin receptor (DTR) driven by a lymphatic-specific promoter in order to noninvasively ablate the lymphatic system of the hind limb. Animals treated in this manner developed lymphedema that was indistinguishable from clinical lymphedema temporally, radiographically, and histologically. Using this model and clinical biopsy specimens, we show that the initial resolution of edema after injury is dependent on the formation of collateral capillary lymphatics and that this process is regulated by M2-polarized macrophages. In addition, we show that despite these initial improvements in lymphatic function, persistent accumulation of CD4+ cells inhibits lymphangiogenesis and promotes sclerosis of collecting lymphatics, resulting in late onset of edema and fibrosis. Our findings therefore provide strong evidence that inflammatory changes after lymphatic injury play a key role in the pathophysiology of lymphedema. 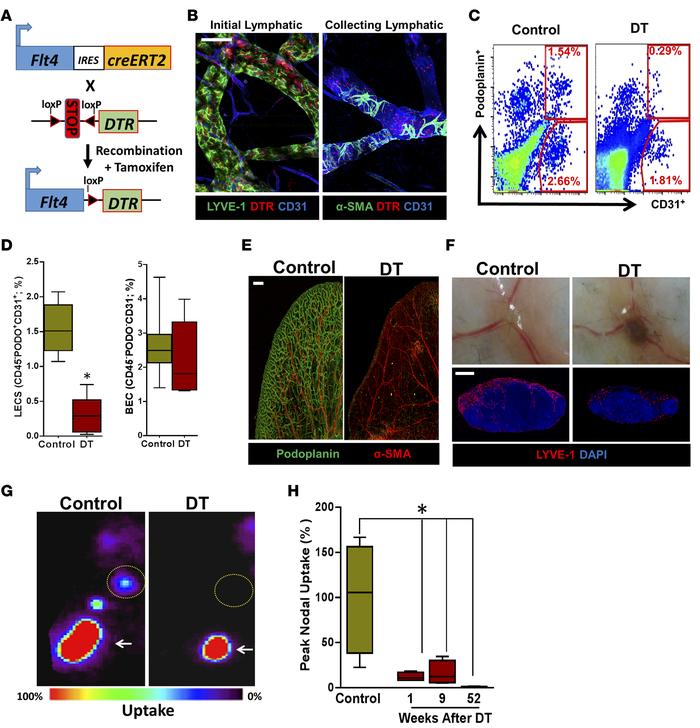