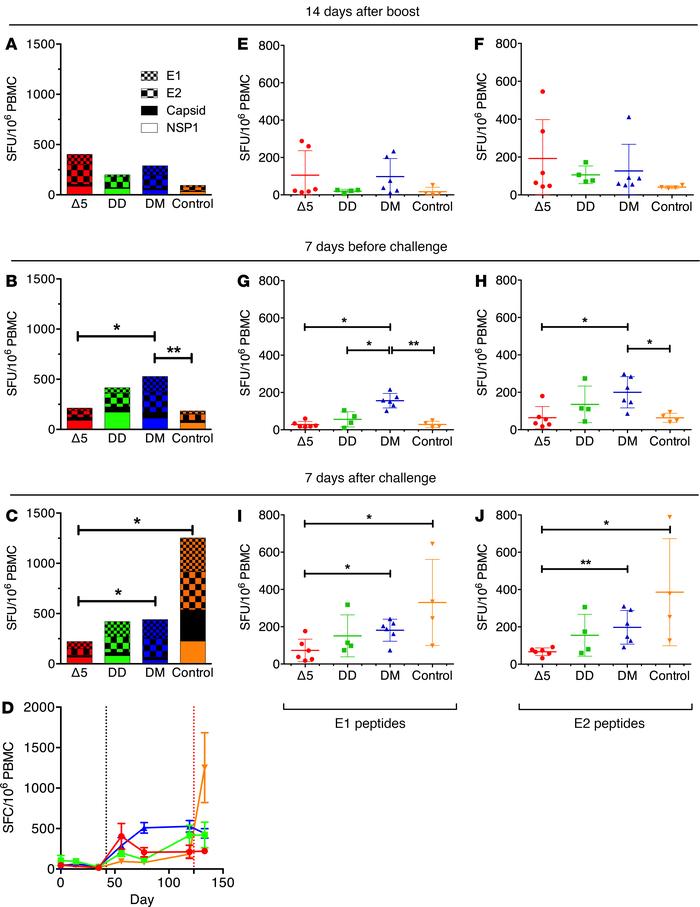 Δ5, attenuated virus ( = 6) (red); DD, homologous prime-boost ( = 4) (green); DM, heterologous prime-boost ( = 6) (blue); Control, no vaccine but NaCl injection only ( = 4) (orange). Panels compare the sum of IFN-γ T cell responses from each group measured by FluoroSpot assays on PBMC collected at 14 days after boost (), 7 days before challenge (), and 7 days after challenge () and stimulated with envelope E1 and E2, Capsid, and nsP1 peptide pools. Statistical comparisons were performed at 14 days after boost, 7 days prechallenge, and 7 days after challenge. Panel compares cumulated IFN-γ responses against all peptides for each group (mean ± SEM). Animals were immunized on days 0 and/or 42 ( axis and black vertical dotted line) and challenged on day 123 (red vertical dotted line). CHIKV-specific IFN-γ T cells responses against E1 (, , ) and E2 (, , ) peptide pools at 14 days after boost ( and ), 7 days before challenge ( and ), and 7 days after challenge ( and ). Panels show IFN-γ responses in individual animals with mean (± SEM). For statistical analyses, the Kruskal-Wallis test followed by the Mann-Whitney test were used to identify differences between groups. Significance is represented by * < 0.05 or ** < 0.01; 95% CI.