Cytokine levels and profiles in macaques. 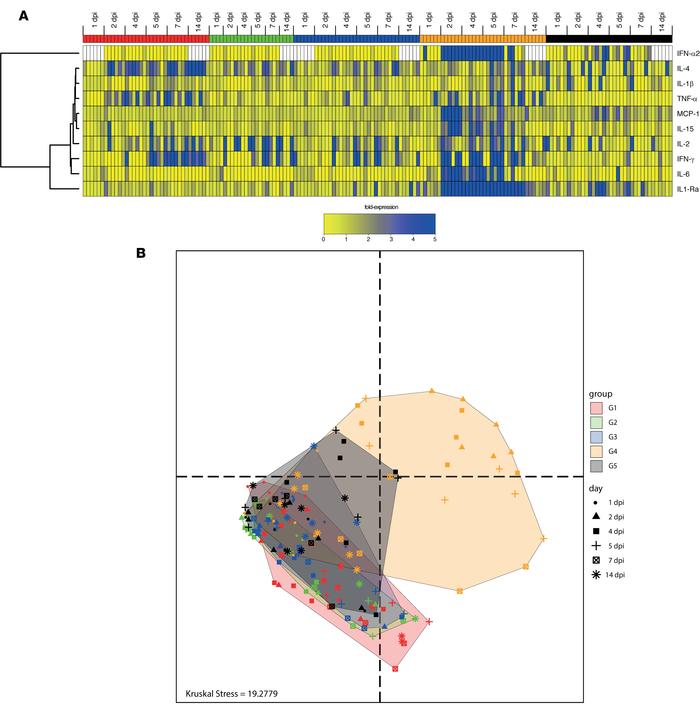 () Heatmap of cytokine levels in plasma of macaque within 1 week after exposition to WT CHIKV after vaccination (G1 to G4) or infection of naive animals with Δ5 virus (G5, safety study). Animals were inoculated with virus on day 0, which corresponded to day 123 in for groups 1–4. Δ5 virus (1×, red), DD (green), DM (blue), control saline (orange), Δ5 virus in the safety study in (black). Missing values are indicated by white boxes. Hierarchical clustering of cytokines and samples were created based on the Euclidean distance and using the complete linkage method. () Multidimensional scaling (MDS) representation of samples based on their cytokine profiles from day 1 to day 14 after exposition to the virus (data from ). Each dot represents the cytokine profile of a sample, plotted in the space of cytokine expressions. The distances between the dots are proportional the Euclidian distances computed between the samples, restricted to the cytokines as in . Each group is delineated by a convex hull (i.e., the smallest convex set containing the points). The Kruskal Stress indicated at the bottom of the representation quantifies the quality of the representation as the percentage of information lost in the dimensionality reduction process.