The expression of indoleamine 2,3-dioxygenase (IDO), a robust immunosuppressant, is significantly induced in macaque tuberculosis (TB) granulomas, where it is expressed on IFN-responsive macrophages and myeloid-derived suppressor cells. IDO expression is also highly induced in human TB granulomas, and products of its activity are detected in patients with TB. In vivo blockade of IDO activity resulted in the reorganization of the granuloma with substantially greater T cells being recruited to the core of the lesions. This correlated with better immune control of TB and reduced lung M. tuberculosis burdens. To study if the IDO blockade strategy can be translated to a bona fide host-directed therapy in the clinical setting of TB, we studied the effect of IDO inhibitor 1-methyl-d-tryptophan adjunctive to suboptimal anti-TB chemotherapy. While two-thirds of controls and one-third of chemotherapy-treated animals progressed to active TB, inhibition of IDO adjunctive to the same therapy protected macaques from TB, as measured by clinical, radiological, and microbiological attributes. Although chemotherapy improved proliferative T cell responses, adjunctive inhibition of IDO further enhanced the recruitment of effector T cells to the lung. These results strongly suggest the possibility that IDO inhibition can be attempted adjunctive to anti-TB chemotherapy in clinical trials.

D1MT and moxifloxacin and ethambutol treatment alone or in conjunction has no distinct effect on clinical correlates of TB disease. 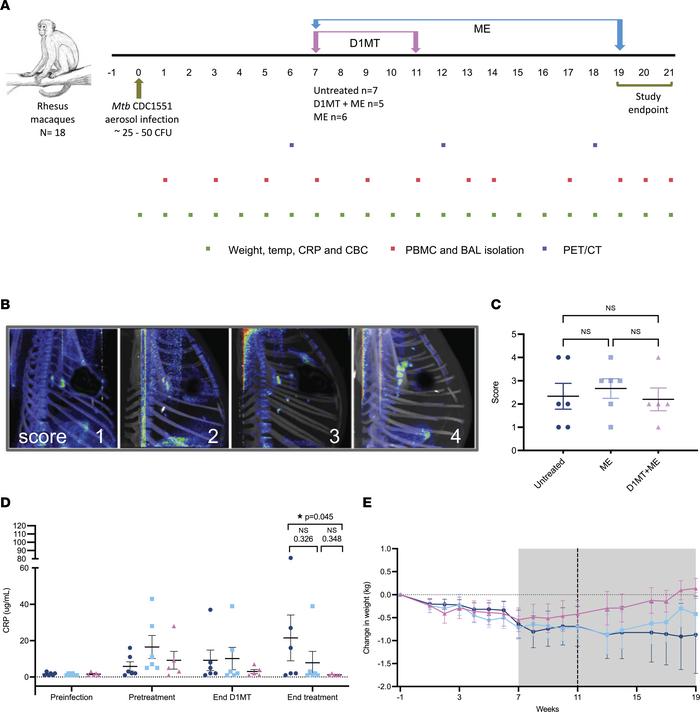 () Shown is the study timeline. Eighteen Indian origin rhesus macaques (RMs) were infected with medium-high dose (~25–50 CFU) of . CDC1551 via aerosol route. The RMs developed TB disease around week 6 postinfection, as confirmed by PET/CT scans, and were subsequently divided into 3 groups: untreated, ME, and ME/D1MT. The treatment started at week 7 postinfection and continued through week 19 postinfection. The RMs were then euthanized, which marked the endpoint of the study. Complete blood count (CBC), CRP, and changes in weight and temperature were monitored weekly, whereas blood and bronchoalveolar lavage (BAL) were collected every 2 weeks for performing immunological assays, except for week 15, as we shifted the scheduled week 15 time point to week 14 because of the winter break. Week 19 through week 21, the necropsies took place, and we collected BAL and blood before euthanizing individual macaques. PET/CT scans were done at week 6, week 12, and week 18 after . infection. () Representative PET/CT images of the . –infected macaques at week 6 postinfection depicting varying degrees of lesions in the lung, used for unbiased classification of the macaques into 3 experimental groups. The RMs were designated scores 1–4. () Graph depicting the distribution of macaques based on the ranks of severity of . infection by lesion fluorodeoxyglucose F18 (FDG) uptake (PET/CT scores) at week 6 to evenly divide into 3 groups. () Graphical representation of average serum CRP levels (μg/mL) at experimental time points. () Graph depicting the mean change in weight (kg) with respect to the baseline values among the 3 groups of macaques over the course of the study. Gray area represents treatment phase, whereas black dotted line shows end of D1MT treatment time point. values are indicated above the plots as obtained from 1-way ANOVA () and Mann-Whitney test (). Data are represented as mean ± SEM.