Although Barrett’s metaplasia of the esophagus (BE) is the only known precursor lesion to esophageal adenocarcinomas (EACs), drivers of cellular transformation in BE remain incompletely understood. We use an artificial intelligence–guided network approach to study EAC initiation and progression. Key predictions are subsequently validated in a human organoid model, in patient-derived biopsy specimens of BE, a case-control study of genomics of BE progression, and in a cross-sectional study of 113 patients with BE and EACs. Our model classified healthy esophagus from BE and BE from EACs in several publicly available gene expression data sets (n = 932 samples). The model confirmed that all EACs must originate from BE and pinpointed a CXCL8/IL8↔neutrophil immune microenvironment as a driver of cellular transformation in EACs and gastroesophageal junction adenocarcinomas. This driver is prominent in White individuals but is notably absent in African Americans (AAs). Network-derived gene signatures, independent signatures of neutrophil processes, CXCL8/IL8 expression, and an absolute neutrophil count (ANC) are associated with risk of progression. SNPs associated with changes in ANC by ethnicity (e.g., benign ethnic neutropenia [BEN]) modify that risk. Findings define a racially influenced immunological basis for cell transformation and suggest that BEN in AAs may be a deterrent to BE→EAC progression.

A Boolean logical model of cellular states during NE→BE→EAC progression. 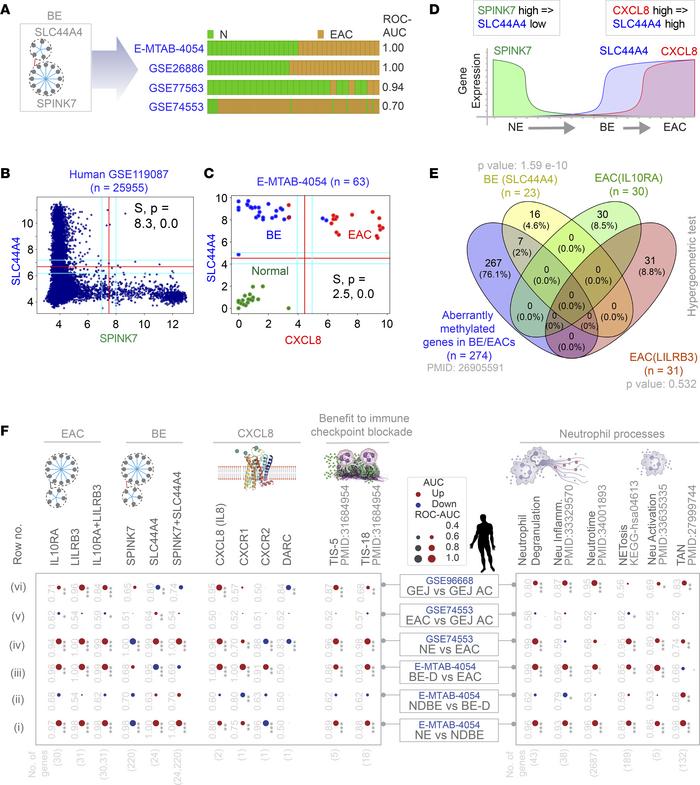 () Bar plots show that BE signatures () can distinguish NE and EAC samples. () A scatterplot for and expression in the global human GSE119087 ( 25,955) data set. Boolean implication -high => -low (S = 8.3; 0.0; FDR < 0.001) is an invariant relationship in the most diverse data set. () A scatterplot of and expression in the E-MTAB-4054 data set. Boolean implication high => -high (S = 2.5; 0.0; FDR <0.001) is an invariant relationship in NE, BE, and EAC samples. () A schematic to visualize the mathematical model of NE→BE→EAC progression based on MiDReG analysis using BIRs. The model suggests that BE ( high, low) must precede EAC ( high, high). () Venn diagram shows the overlaps between the gene clusters from the BE and EAC maps with the genes reported to be methylated in multiple independent studies ( 274 of 22,178 genes tested in total). Only significant values, as determined using hypergeometric analyses, are displayed. () The human EAC immune microenvironment is visualized as bubble plots of ROC-AUC values (radius of circles are based on the ROC-AUC) demonstrating the direction of gene regulation (upregulation, red; downregulation, blue) for the classification of samples (gene signatures in columns; data set and sample comparison in rows). values based on Welch’s test (of composite score of gene expression values) are provided using standard code (* ≤ 0.05, ** ≤ 0.01, *** ≤ 0.001) next to the ROC-AUC. Left: Panel displays the classification of NE, NDBE, DBE, EAC, and GEJ-AC based on the indicated gene signatures (top) in 2 independent data sets (E-MTAB-4054, GSE74553). Right: Panel displays the classification of the same samples based on neutrophil signatures. Violin plots for selected neutrophil signatures are displayed in .