People with HIV (PWH) on antiretroviral therapy (ART) experience elevated rates of neurological impairment, despite controlling for demographic factors and comorbidities, suggesting viral or neuroimmune etiologies for these deficits. Here, we apply multimodal and cross-compartmental single-cell analyses of paired cerebrospinal fluid (CSF) and peripheral blood in PWH and uninfected controls. We demonstrate that a subset of central memory CD4+ T cells in the CSF produced HIV-1 RNA, despite apparent systemic viral suppression, and that HIV-1–infected cells were more frequently found in the CSF than in the blood. Using cellular indexing of transcriptomes and epitopes by sequencing (CITE-seq), we show that the cell surface marker CD204 is a reliable marker for rare microglia-like cells in the CSF, which have been implicated in HIV neuropathogenesis, but which we did not find to contain HIV transcripts. Through a feature selection method for supervised deep learning of single-cell transcriptomes, we find that abnormal CD8+ T cell activation, rather than CD4+ T cell abnormalities, predominated in the CSF of PWH compared with controls. Overall, these findings suggest ongoing CNS viral persistence and compartmentalized CNS neuroimmune effects of HIV infection during ART and demonstrate the power of single-cell studies of CSF to better understand the CNS reservoir during HIV infection.

Single-cell RNA sequencing of CSF and blood from PWH and uninfected controls. 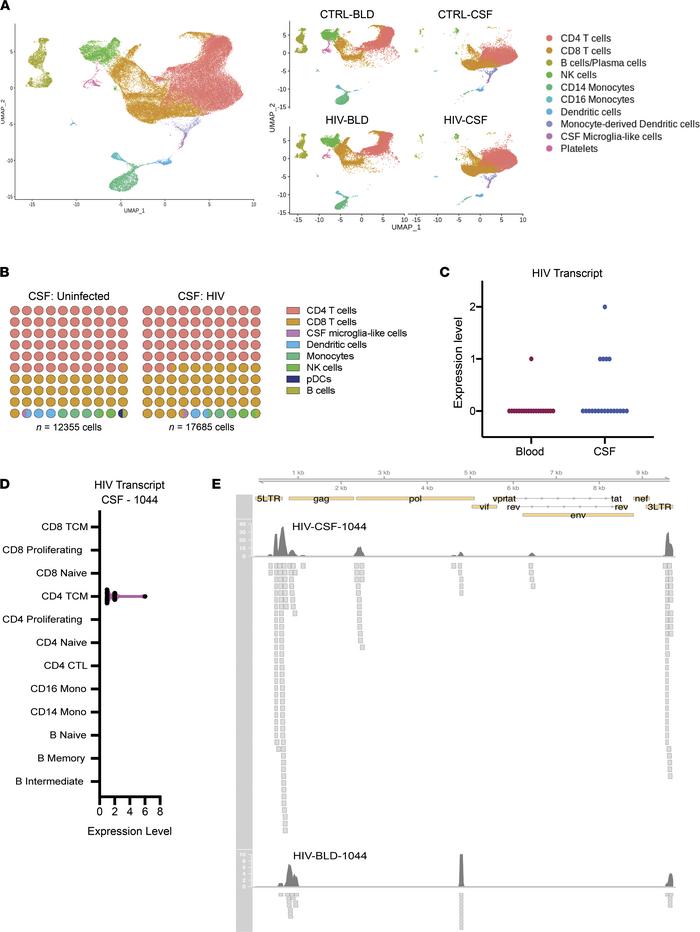