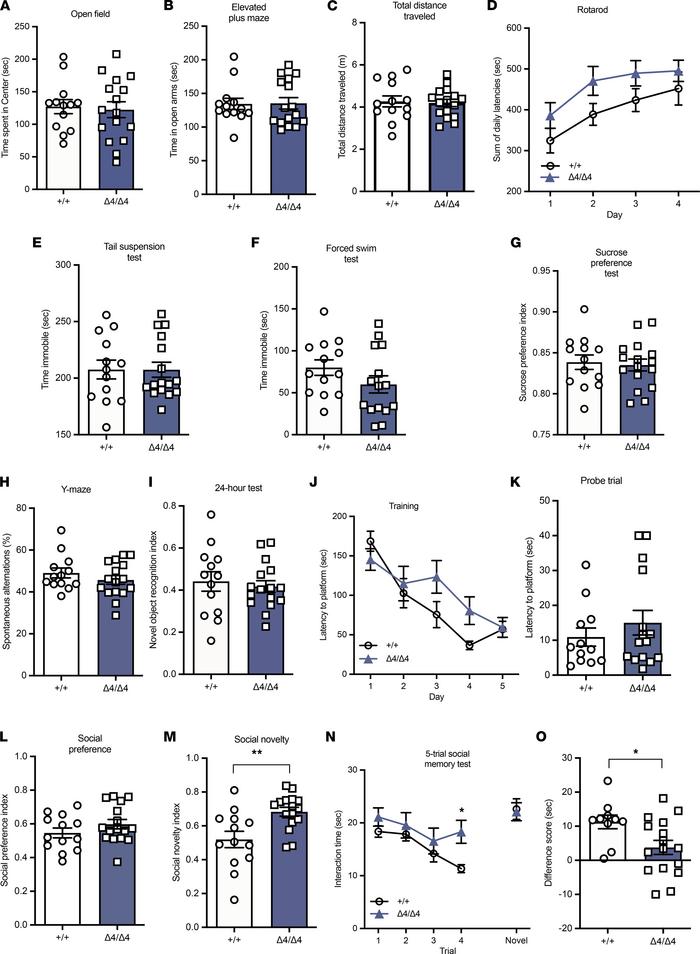 Assays characterizing the behavioral phenotype of the Phf21b+/+ (+/+) and Phf21bΔ4/Δ4 (Δ4/Δ4) mice. () Time spent in the center of the open field arena. () Time spent in the open arms of the elevated-plus maze. () Total distance traveled in the elevated-plus maze. () Sum of latencies to fall from an accelerating rotarod as a motor coordination assessment in the +/+ and Δ4/Δ4 mice. () Time spent immobile in the tail suspension and () forced swim tests. () Sucrose preference index as a measure of anhedonia. () Percentage of spontaneous alternations in the Y-maze test for spatial working memory. () Novel object recognition index of the +/+ and Δ4/Δ4 animals in a test trial 24 hours posttraining. () Daily latencies to platform over 5 training days in the Morris water maze. () Latency to platform location during the probe test on the sixth day of the Morris water maze test. () Preference for social interaction of the +/+ and Δ4/Δ4 animals. () Preference for social novelty of the +/+ and Δ4/Δ4 mice. () Interaction time between a subject animal with the same stranger animal over 4 trials, with an intertrial interval of 10 minutes. A novel stranger was introduced at the fifth trial. () The difference score is given by the difference in interaction time between the fifth (dishabituation) trial with the novel stranger and the final/fourth (habituation) trial with the familiar stranger. Values are presented as mean ± SEM; = 13–16/group; Student’s test/Mann-Whitney test (–, –, –, and ); 2-way ANOVA (, , and ); * < 0.05; ** < 0.01.