Loss of retinal blood flow autoregulation is an early feature of diabetes that precedes the development of clinically recognizable diabetic retinopathy (DR). Retinal blood flow autoregulation is mediated by the myogenic response of the retinal arterial vessels, a process that is initiated by the stretch‑dependent activation of TRPV2 channels on the retinal vascular smooth muscle cells (VSMCs). Here, we show that the impaired myogenic reaction of retinal arterioles from diabetic animals is associated with a complete loss of stretch‑dependent TRPV2 current activity on the retinal VSMCs. This effect could be attributed, in part, to TRPV2 channel downregulation, a phenomenon that was also evident in human retinal VSMCs from diabetic donors. We also demonstrate that TRPV2 heterozygous rats, a nondiabetic model of impaired myogenic reactivity and blood flow autoregulation in the retina, develop a range of microvascular, glial, and neuronal lesions resembling those observed in DR, including neovascular complexes. No overt kidney pathology was observed in these animals. Our data suggest that TRPV2 dysfunction underlies the loss of retinal blood flow autoregulation in diabetes and provide strong support for the hypothesis that autoregulatory deficits are involved in the pathogenesis of DR. 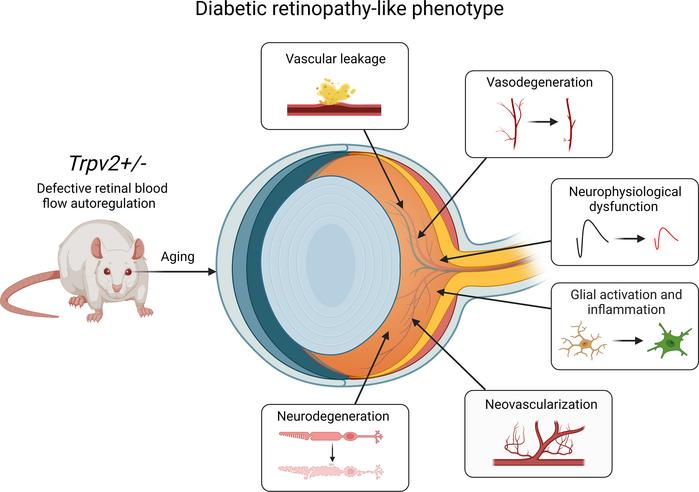