Human NK cell deficiency (NKD) is a primary immunodeficiency in which the main clinically relevant immunological defect involves missing or dysfunctional NK cells. Here, we describe a familial NKD case in which 2 siblings had a substantive NKD and neutropenia in the absence of other immune system abnormalities. Exome sequencing identified compound heterozygous variants in Go-Ichi-Ni-San (GINS) complex subunit 4 (GINS4, also known as SLD5), an essential component of the human replicative helicase, which we demonstrate to have a damaging impact upon the expression and assembly of the GINS complex. Cells derived from affected individuals and a GINS4-knockdown cell line demonstrate delayed cell cycle progression, without signs of improper DNA synthesis or increased replication stress. By modeling partial GINS4 depletion in differentiating NK cells in vitro, we demonstrate the causal relationship between the genotype and the NK cell phenotype, as well as a cell-intrinsic defect in NK cell development. Thus, biallelic partial loss-of-function mutations in GINS4 define a potentially novel disease-causing gene underlying NKD with neutropenia. Together with the previously described mutations in other helicase genes causing NKD, and with the mild defects observed in other human cells, these variants underscore the importance of this pathway in NK cell biology. 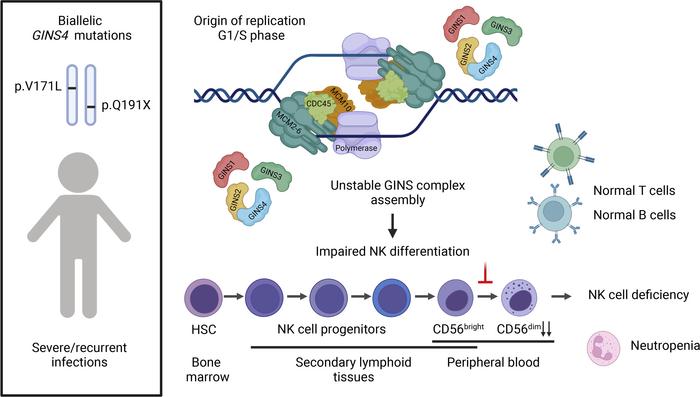