Approximately 80% of pancreatic cancer patients suffer from cachexia, and one-third die due to cachexia-related complications such as respiratory failure and cardiac arrest. Although there has been considerable research into cachexia mechanisms and interventions, there are, to date, no FDA-approved therapies. A major contributing factor for the lack of therapy options could be the failure of animal models to accurately recapitulate the human condition. In this study, we generated an aged model of pancreatic cancer cachexia to compare cachexia progression in young versus aged tumor-bearing mice. Comparative skeletal muscle transcriptome analyses identified 3-methyladenine (3-MA) as a candidate antiwasting compound. In vitro analyses confirmed antiwasting capacity, while in vivo analysis revealed potent antitumor effects. Transcriptome analyses of 3-MA–treated tumor cells implicated Perp as a 3-MA target gene. We subsequently (a) observed significantly higher expression of Perp in cancer cell lines compared with control cells, (b) noted a survival disadvantage associated with elevated Perp, and (c) found that 3-MA–associated Perp reduction inhibited tumor cell growth. Finally, we have provided in vivo evidence that survival benefits conferred by 3-MA administration are independent of its effect on tumor progression. Taken together, we report a mechanism linking 3-MA to Perp inhibition, and we further implicate Perp as a tumor-promoting factor in pancreatic cancer. 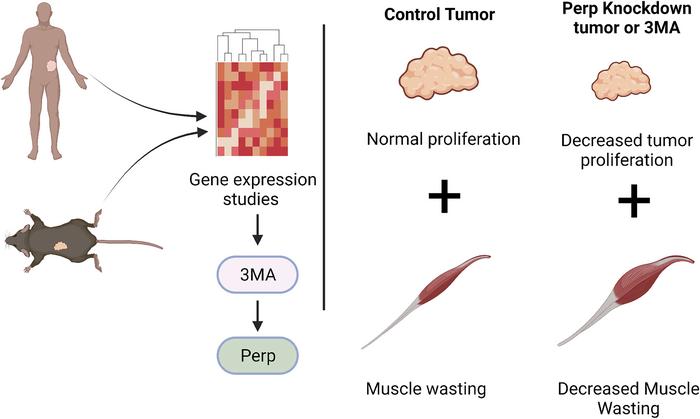