The meager regenerative capacity of adult mammalian hearts appears to be driven by the proliferation of endogenous cardiomyocytes; thus, strategies targeting mechanisms of cardiomyocyte cell cycle regulation, such as the Hippo/Yes-associated protein (Hippo/Yap) pathway, could lead to the development of promising therapies for heart disease. The pharmacological product TT-10 increases cardiomyocyte proliferation by upregulating nuclear Yap levels. When intraperitoneal injections of TT-10 were administered to infarcted mouse hearts, the treatment promoted cardiomyocyte proliferation and was associated with declines in infarct size 1 week after administration, but cardiac function worsened at later time points. Here, we investigated whether encapsulating TT-10 into poly-lactic-co-glycolic acid nanoparticles (NPs) before administration could extend the duration of TT-10 delivery and improve the potency of TT-10 for myocardial repair. TT-10 was released from the TT-10–loaded NPs for up to 4 weeks in vitro, and intramyocardial injections of TT-10–delivered NPs stably improved cardiac function from week 1 to week 4 after administration to infarcted mouse hearts. TT-10–delivered NP treatment was also associated with significantly smaller infarcts at week 4, with increases in cardiomyocyte proliferation and nuclear Yap abundance and with declines in cardiomyocyte apoptosis. Thus, NP-mediated delivery appears to enhance both the potency and durability of TT-10 treatment for myocardial repair. 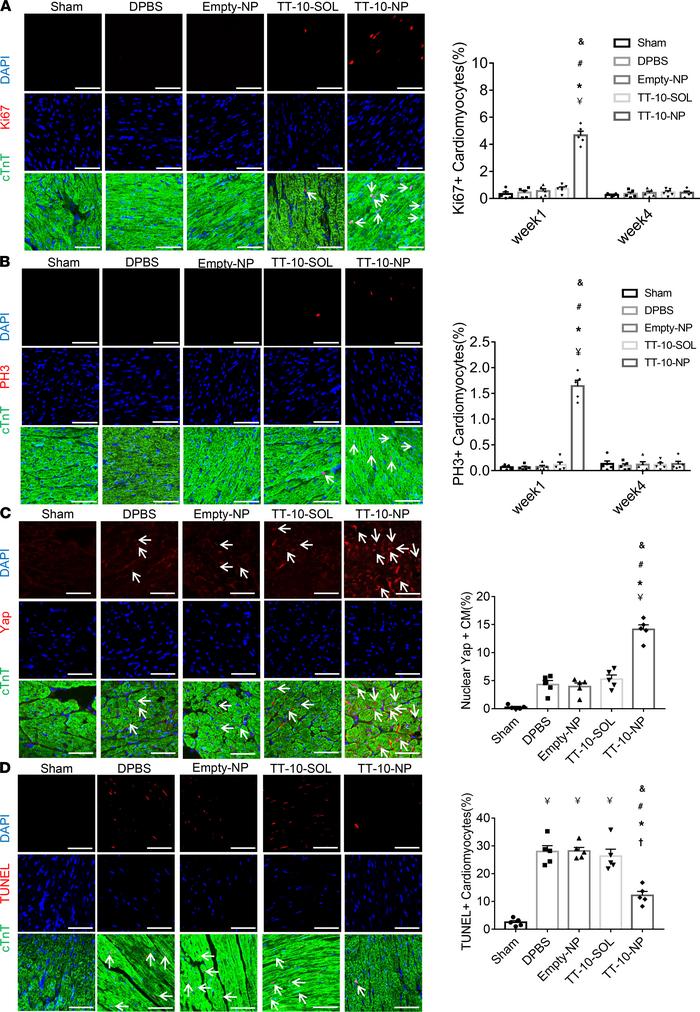