Inherited retinal diseases, such as retinitis pigmentosa (RP), can be caused by thousands of different mutations, a small number of which have been successfully treated with gene replacement. However, this approach has yet to scale and may not be feasible in many cases, highlighting the need for interventions that could benefit more patients. Here, we found that microglial phagocytosis is upregulated during cone degeneration in RP, suggesting that expression of “don’t-eat-me” signals such as CD47 might confer protection to cones. To test this, we delivered an adeno-associated viral (AAV) vector expressing CD47 on cones, which promoted cone survival in 3 mouse models of RP and preserved visual function. Cone rescue with CD47 required a known interacting protein, signal regulatory protein α (SIRPα), but not an alternative interacting protein, thrombospondin-1 (TSP1). Despite the correlation between increased microglial phagocytosis and cone death, microglia were dispensable for the prosurvival activity of CD47, suggesting that CD47 interacts with SIRPα on nonmicroglial cells to alleviate degeneration. These findings establish augmentation of CD47/SIRPα signaling as a potential treatment strategy for RP and possibly other forms of neurodegeneration. 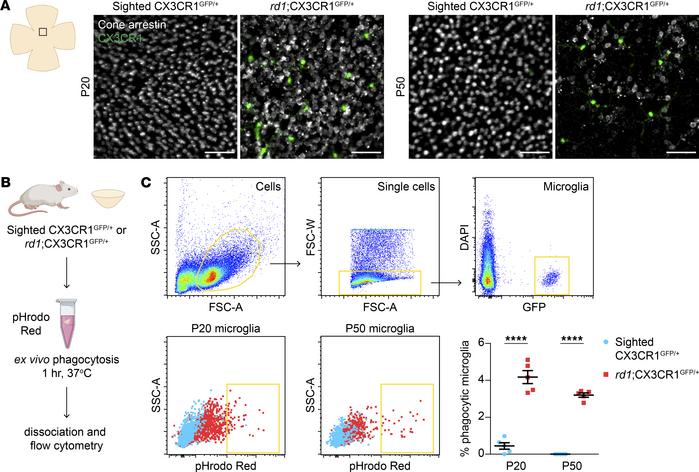