Gorham-Stout disease (GSD) is a sporadically occurring lymphatic disorder. Patients with GSD develop ectopic lymphatics in bone, gradually lose bone, and can have life-threatening complications, such as chylothorax. The etiology of GSD is poorly understood, and current treatments for this disease are inadequate for most patients. To explore the pathogenesis of GSD, we performed targeted high-throughput sequencing with samples from a patient with GSD and identified an activating somatic mutation in KRAS (p.G12V). To characterize the effect of hyperactive KRAS signaling on lymphatic development, we expressed an active form of KRAS (p.G12D) in murine lymphatics (iLECKras mice). We found that iLECKras mice developed lymphatics in bone, which is a hallmark of GSD. We also found that lymphatic valve development and maintenance was altered in iLECKras mice. Because most iLECKras mice developed chylothorax and died before they had significant bone disease, we analyzed the effect of trametinib (an FDA-approved MEK1/2 inhibitor) on lymphatic valve regression in iLECKras mice. Notably, we found that trametinib suppressed this phenotype in iLECKras mice. Together, our results demonstrate that somatic activating mutations in KRAS can be associated with GSD and reveal that hyperactive KRAS signaling stimulates the formation of lymphatics in bone and impairs the development of lymphatic valves. These findings provide insight into the pathogenesis of GSD and suggest that trametinib could be an effective treatment for GSD. 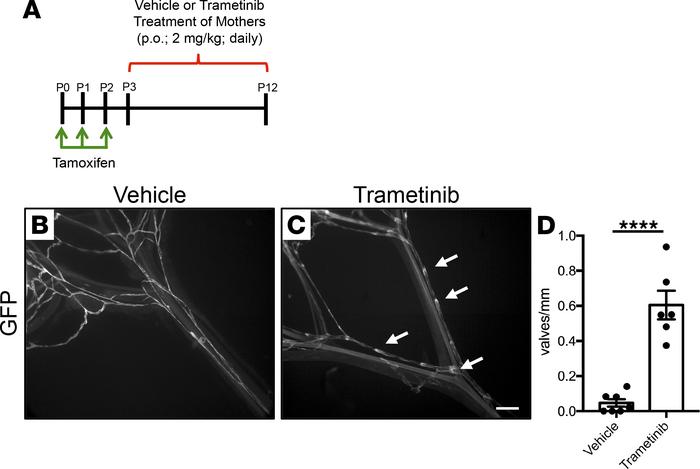