Repetitive mild traumatic brain injuries (mTBI) disrupt CNS barriers, the erosion of which has been linked to long-term neurodegenerative and psychiatric conditions. Although much attention has been devoted to CNS vasculature following mTBI, little is known about the glia limitans superficialis — a barrier of surface-associated astrocytes that helps protect the CNS parenchyma and maintain homeostasis. Here, we identify the glia limitans superficialis as a crucial barrier surface whose breakdown after acute repeat mTBI facilitates increased cell death and recruitment of peripheral myelomonocytic cells. Using intravital microscopy, we show that brain-resident microglia fortify this structure after a single mTBI, yet they fail to do so following secondary injury, which triggers massive recruitment of myelomonocytic cells from the periphery that contribute to further destruction of the glia limitans superficialis but not cortical cell death. We demonstrate, instead, that reactive oxygen species (ROS) generated in response to repetitive head injury are largely responsible for enhanced cortical cell death, and therapeutic administration of the antioxidant glutathione markedly reduces this cell death, preserves the glia limitans, and prevents myelomonocytic cells from entering the brain parenchyma. Collectively, our findings underscore the importance of preserving the glia limitans superficialis after brain injury and offer a therapeutic means to protect this structure and the underlying cortex. 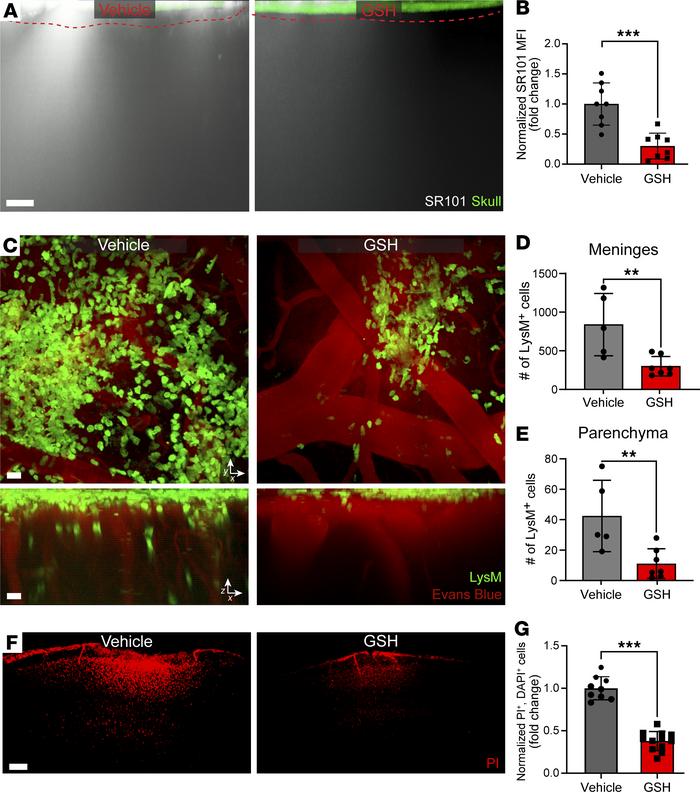