Differential expression of DRV1, ALX, and DRV2 receptors and functional responses in sepsis are counter regulated by RvD1 and RvD2. 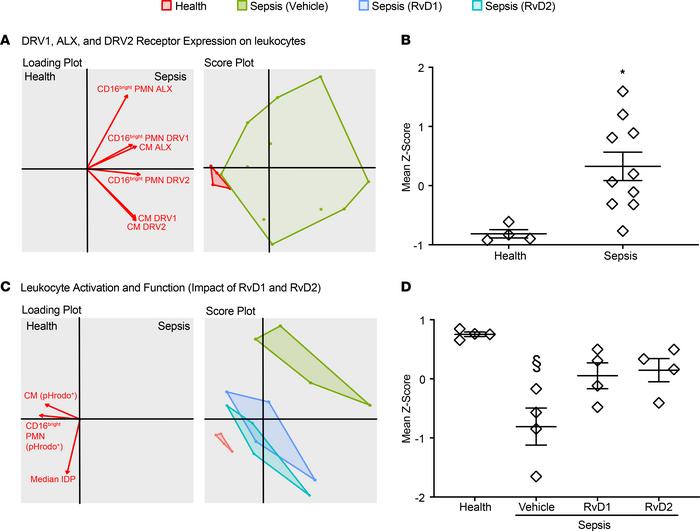 (–) Two-dimensional score and loading plots from multivariate principal component analysis (and) and mean score (and) were performed for levels of expression of DRV1, ALX, and DRV2 on leukocytes, and leukocyte activation and function, as indicated by median IDP and percentage of pHrodo+CD16bright PMN, and pHrodo+ classical monocytes (CM). Leukocytes from healthy subjects are indicated in red, those from patients with sepsis incubated with vehicle control are in green, and addition of RvD1 and RvD2 is indicated in blue and aquamarine, respectively. The mean score was derived from individual variable scores in a given subject ( = 4, healthy subjects; = 10, patients with sepsis in and ; and = 4, patients with sepsis in and ). The data presented include only subjects with complete data set of all variables (receptor, function, and activation). Values are expressed as the mean ± SEM. * < 0.05 health versus sepsis by unpaired, 2-tailed test. § < 0.05 Kruskal-Wallis test, followed by Dunn’s test for multiple comparisons.