Experimental autoimmune encephalomyelitis (EAE) is a well-characterized animal model of multiple sclerosis. During the early phase of EAE, infiltrating monocytes and monocyte-derived macrophages contribute to T cell recruitment, especially CD4+ T cells, into the CNS, resulting in neuronal demyelination; however, in later stages, they promote remyelination and recovery by removal of myelin debris by phagocytosis. Signal regulatory protein α and CD47 are abundantly expressed in the CNS, and deletion of either molecule is protective in myelin oligodendrocyte glycoprotein–induced EAE because of failed effector T cell expansion and trafficking. Here we report that treatment with the function blocking CD47 Ab Miap410 substantially reduced the infiltration of pathogenic immune cells but impaired recovery from paresis. The underlying mechanism was by blocking the emergence of CD11chiMHCIIhi microglia at peak disease that expressed receptors for phagocytosis, scavenging, and lipid catabolism, which mediated clearance of myelin debris and the transition of monocytes to macrophages in the CNS. In the recovery phase of EAE, Miap410 Ab–treated mice had worsening paresis with sustained inflammation and limited remyelination as compared with control Ab–treated mice. In summary, Ab blockade of CD47 impaired resolution of CNS inflammation, thus worsening EAE. 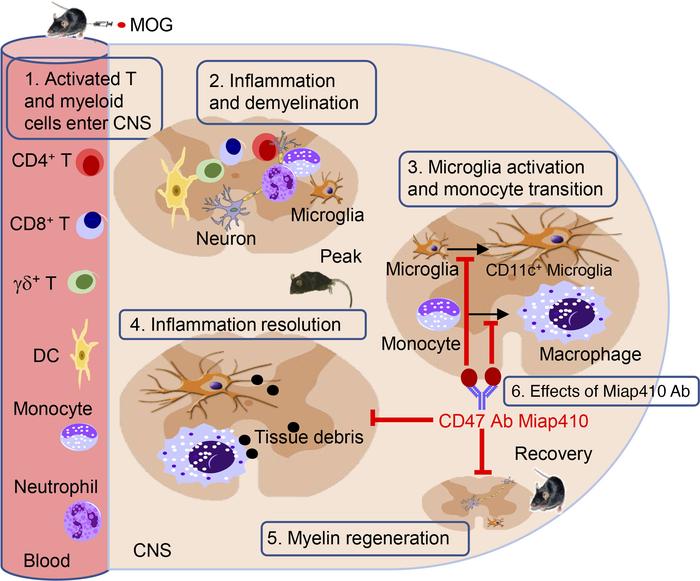