Aniridia is most commonly caused by haploinsufficiency of the PAX6 gene, characterized by variable iris and foveal hypoplasia, nystagmus, cataracts, glaucoma, and aniridia-related keratopathy (ARK). Genotype-phenotype correlations have previously been described; however, detailed longitudinal studies of aniridia are less commonly reported. We identified 86 patients from 62 unrelated families with molecularly confirmed heterozygous PAX6 variants from a UK-based single-center ocular genetics service. They were categorized into mutation groups, and a retrospective review of clinical characteristics (ocular and systemic) from baseline to most recent was recorded. One hundred and seventy-two eyes were evaluated, with a mean follow-up period of 16.3 ± 12.7 years. Nystagmus was recorded in 87.2% of the eyes, and foveal hypoplasia was found in 75%. Cataracts were diagnosed in 70.3%, glaucoma in 20.6%, and ARK in 68.6% of eyes. Prevalence, age of diagnosis and surgical intervention, and need for surgical intervention varied among mutation groups. Overall, the missense mutation subgroup had the mildest phenotype, and surgically naive eyes maintained better visual acuity. Systemic evaluation identified type 2 diabetes in 12.8% of the study group, which is twice the UK prevalence. This is the largest longitudinal study of aniridia in the UK, and as such, it can provide insights into prognostic indicators for patients and guiding clinical management of both ocular and systemic features.

Distribution of the 48 different variants identified in this cohort. 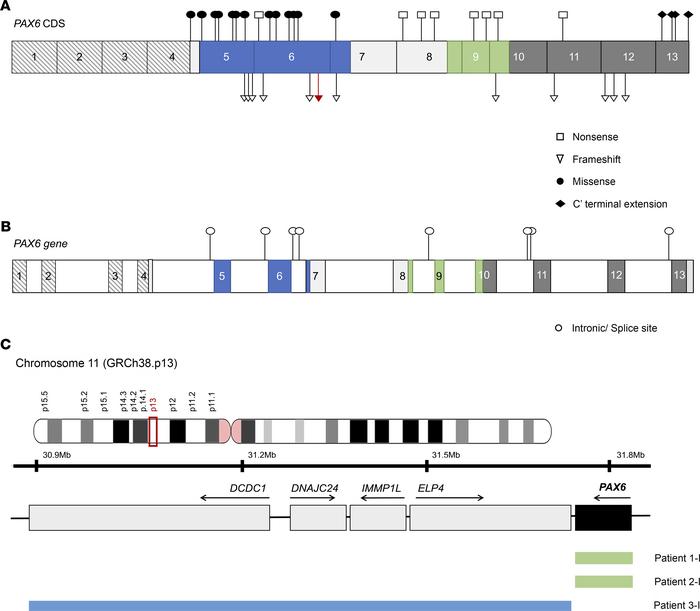