The skin lesion erythema migrans (EM) is an initial sign of the Ixodes tick–transmitted Borreliella spirochetal infection known as Lyme disease. T cells and innate immune cells have previously been shown to predominate the EM lesion and promote the reaction. Despite the established importance of B cells and antibodies in preventing infection, the role of B cells in the skin immune response to Borreliella is unknown. Here, we used single-cell RNA-Seq in conjunction with B cell receptor (BCR) sequencing to immunophenotype EM lesions and their associated B cells and BCR repertoires. We found that B cells were more abundant in EM in comparison with autologous uninvolved skin; many were clonally expanded and had circulating relatives. EM-associated B cells upregulated the expression of MHC class II genes and exhibited preferential IgM isotype usage. A subset also exhibited low levels of somatic hypermutation despite a gene expression profile consistent with memory B cells. Our study demonstrates that single-cell gene expression with paired BCR sequencing can be used to interrogate the sparse B cell populations in human skin and reveals that B cells in the skin infection site in early Lyme disease expressed a phenotype consistent with local antigen presentation and antibody production. 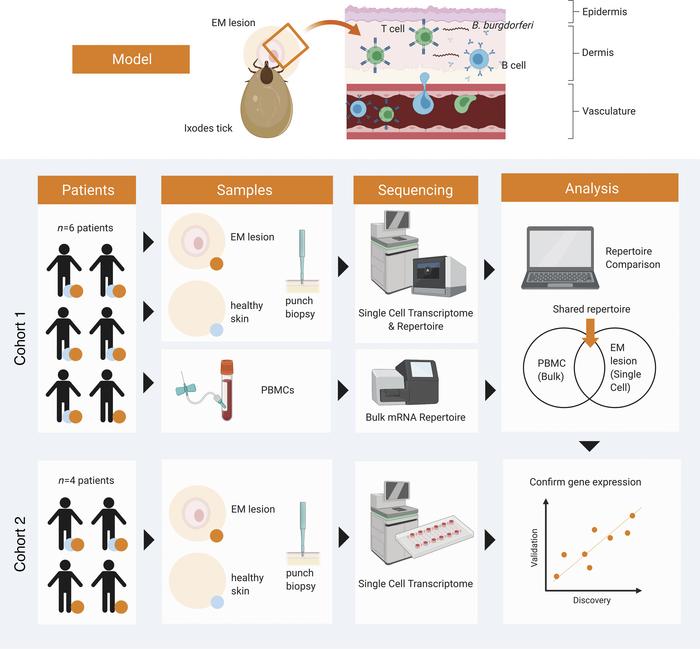 EM and uninvolved skin samples were first isolated from patients by punch biopsy and submitted for scRNA-Seq. In cohort 1 ( = 6), paired PBMCs were prepared as unpaired bulk TCRB and IGH repertoires from bulk RNA and also submitted for repertoire sequencing using the 10× Genomics Chromium platform. The characteristics of B cells and T cells found in both compartments were analyzed based on gene expression and features of their respective V(D)J sequences. Cohort 2 ( = 4) subject samples were sequenced using a nanowell-based single-cell transcriptome approach (Seq-Well) to support findings from cohort 1. EM, erythema migrans; sc, single-cell.