The mechanism controlling long-chain fatty acid (LCFA) mobilization from adipose tissue is not well understood. Here, we investigated how the LCFA transporter CD36 regulates this process. By using tissue-specific KO mouse models, we showed that CD36 in adipocytes and endothelial cells mediated both LCFA deposition into and release from adipose tissue. We demonstrated the role of adipocytic and endothelial CD36 in promoting tumor growth and chemoresistance conferred by adipose tissue–derived LCFAs. We showed that dynamic cysteine S-acylation of CD36 in adipocytes, endothelial cells, and cancer cells mediated intercellular LCFA transport. We demonstrated that lipolysis induction in adipocytes triggered CD36 deacylation and deglycosylation, as well as its dissociation from interacting proteins, prohibitin-1 (PHB) and annexin 2 (ANX2). Our data indicate that lipolysis triggers caveolar endocytosis and translocation of CD36 from the cell membrane to lipid droplets. This study suggests a mechanism for both outside-in and inside-out cellular LCFA transport regulated by CD36 S-acylation and its interactions with PHB and ANX2. 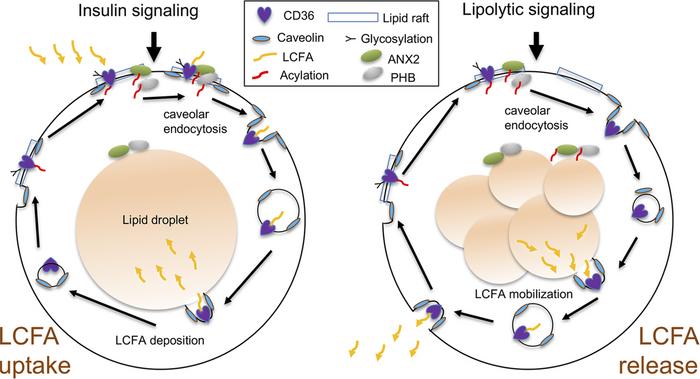