Obesity is the major driver of the worldwide epidemic in type 2 diabetes (T2D). In the obese state, chronically elevated plasma free fatty acid levels contribute to peripheral insulin resistance, which can ultimately lead to the development of T2D. For this reason, drugs that are able to regulate lipolytic processes in adipocytes are predicted to have considerable therapeutic potential. Gi-coupled P2Y14 receptor (P2Y14R; endogenous agonist, UDP-glucose) is abundantly expressed in both mouse and human adipocytes. Because activated Gi-type G proteins exert an antilipolytic effect, we explored the potential physiological relevance of adipocyte P2Y14Rs in regulating lipid and glucose homeostasis. Metabolic studies indicate that the lack of adipocyte P2Y14R enhanced lipolysis only in the fasting state, decreased body weight, and improved glucose tolerance and insulin sensitivity. Mechanistic studies suggested that adipocyte P2Y14R inhibits lipolysis by reducing lipolytic enzyme activity, including ATGL and HSL. In agreement with these findings, agonist treatment of control mice with a P2Y14R agonist decreased lipolysis, an effect that was sensitive to inhibition by a P2Y14R antagonist. In conclusion, we demonstrate that adipose P2Y14Rs were critical regulators of whole-body glucose and lipid homeostasis, suggesting that P2Y14R antagonists might be beneficial for the therapy of obesity and T2D. 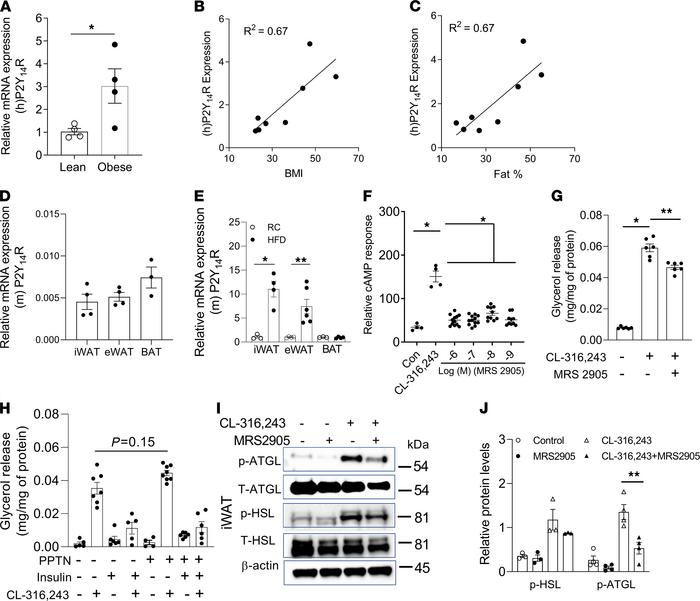