Proline rich 11 (PRR11), a novel tumor-related gene, has been identified in different tumors. However, the relevant biological functions of PRR11 in human clear cell renal cell carcinoma (ccRCC) have not been studied. In this study, we first identified PRR11 as a biomarker of ccRCC and predictor of poor prognosis by bioinformatics. Then, we showed that PRR11 silencing substantially reduced ccRCC cell proliferation and migration in vitro and in vivo. Importantly, we found that PRR11 induced the degradation of the E2F1 protein through its interaction with E2F1, and PRR11 reduced the stability of the E2F1 protein in ccRCC cells, thereby affecting cell cycle progression. Further results indicated that the downregulation of E2F1 expression partially reversed the changes in ccRCC cell biology caused by PRR11 deletion. In addition, we showed that PRR11 was a target gene of c-Myc. The transcription factor c-Myc may have promoted the expression of PRR11 in ccRCC cells by binding to the PRR11 promoter region, thereby accelerating the progression of ccRCC. In summary, we found that PRR11 served as an oncogene in ccRCC, and PRR11 reduced the protein stability of E2F1 and could be activated by c-Myc. 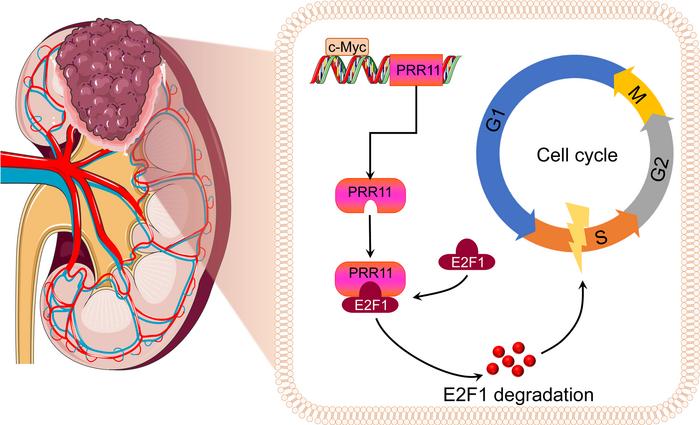