Fibroproliferative disorders such as systemic sclerosis (SSc) have no effective therapies and result in significant morbidity and mortality. We recently demonstrated that the C-terminal domain of endostatin, known as E4, prevented and reversed both dermal and pulmonary fibrosis. Our goal was to identify the mechanism by which E4 abrogates fibrosis and its cell surface binding partner(s). Our findings show that E4 activated the urokinase pathway and increased the urokinase plasminogen activator (uPA) to type 1 plasminogen activator inhibitor (PAI-1) ratio. In addition, E4 substantially increased MMP-1 and MMP-3 expression and activity. In vivo, E4 reversed bleomycin induction of PAI-1 and increased uPA activity. In patients with SSc, the uPA/PAI-1 ratio was decreased in both lung tissues and pulmonary fibroblasts compared with normal donors. Proteins bound to biotinylated-E4 were identified as enolase-1 (ENO) and uPA receptor (uPAR). The antifibrotic effects of E4 required uPAR. Further, ENO mediated the fibrotic effects of TGF-β1 and exerted TGF-β1–independent fibrotic effects. Our findings suggest that the antifibrotic effect of E4 is mediated, in part, by regulation of the urokinase pathway and induction of MMP-1 and MMP-3 levels and activity in a uPAR-dependent manner, thus promoting extracellular matrix degradation. Further, our findings identify a moonlighting function for the glycolytic enzyme ENO in fibrosis. 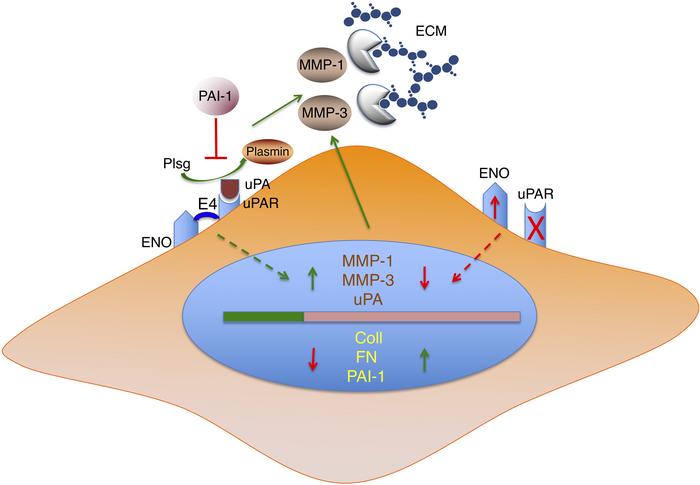