Xanthine oxidoreductase (XOR) is an enzyme that catalyzes hypoxanthine to xanthine and xanthine to uric acid, respectively. However, the underlying mechanisms of increased plasma XOR and its pathological roles in systemic diseases, such as atherosclerosis, are not fully understood. In this study, we found that changes in plasma XOR activity after bariatric surgery closely associated with those in liver enzymes, but not with those in BMI. In a mouse model of nonalcoholic fatty liver disease/steatohepatitis (NAFLD/NASH), plasma XOR activity markedly increased. Besides, purine catabolism was accelerated in the plasma per se of NASH mice and human patients with high XOR activity. In our NASH mice, we observed an increased vascular neointima formation consisting of dedifferentiated vascular smooth muscle cells (SMCs), which was significantly attenuated by topiroxostat, a selective XOR inhibitor. In vitro, human liver S9–derived XOR promoted proliferation of SMCs with phenotypic modulation and induced ROS production by catabolizing hypoxanthine released from human endothelial cells. Collectively, the results from human and mouse models suggest that increased plasma XOR activity, mainly explained by excess hepatic leakage, was involved in the pathogenesis of vascular injury, especially in NAFLD/NASH conditions. 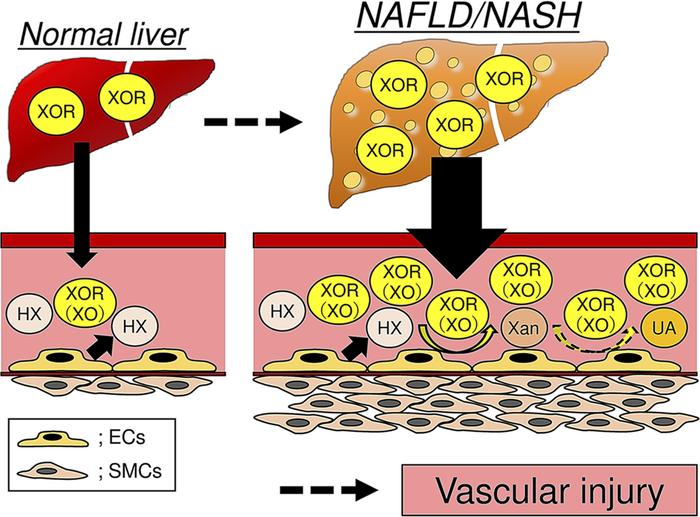