Modulation of the effects of class Ib antiarrhythmics on cardiac NaV1.5-encoded channels by accessory NaVβ subunits

Modulation of the effects of class Ib antiarrhythmics on cardiac NaV1.5-encoded channels by accessory NaVβ subunits

Native myocardial voltage-gated sodium (NaV) channels function in macromolecular complexes comprising a pore-forming (α) subunit and multiple accessory proteins. Here, we investigated the impact of accessory NaVβ1 and NaVβ3 subunits on the functional effects of 2 well-known class Ib antiarrhythmics, lidocaine and ranolazine, on the predominant NaV channel α subunit, NaV1.5, expressed in the mammalian heart. We showed that both drugs stabilized the activated conformation of the voltage sensor of domain-III (DIII-VSD) in NaV1.5. In the presence of NaVβ1, the effect of lidocaine on the DIII-VSD was enhanced, whereas the effect of ranolazine was abolished. Mutating the main class Ib drug-binding site, F1760, affected but did not abolish the modulation of drug block by NaVβ1/β3. Recordings from adult mouse ventricular myocytes demonstrated that loss of Scn1b (NaVβ1) differentially affected the potencies of lidocaine and ranolazine. In vivo experiments revealed distinct ECG responses to i.p. injection of ranolazine or lidocaine in WT and Scn1b-null animals, suggesting that NaVβ1 modulated drug responses at the whole-heart level. In the human heart, we found that SCN1B transcript expression was 3 times higher in the atria than ventricles, differences that could, in combination with inherited or acquired cardiovascular disease, dramatically affect patient response to class Ib antiarrhythmic therapies. 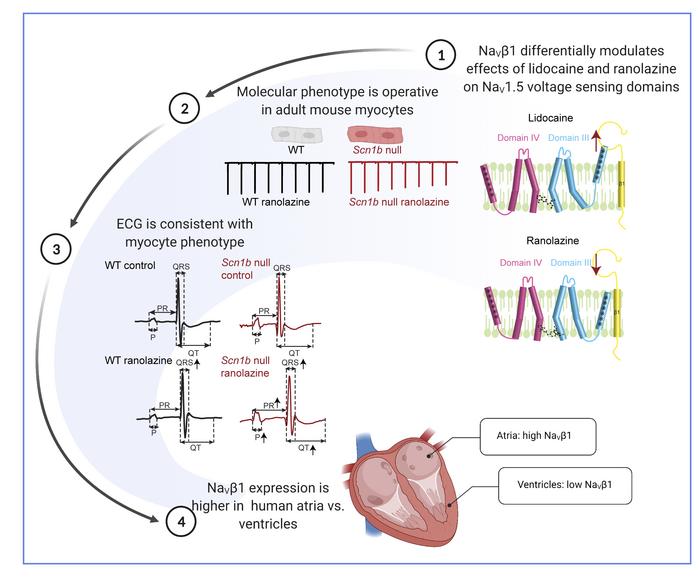