Mutations in the gene SFTPC, encoding surfactant protein C (SP-C), are associated with interstitial lung disease in children and adults. To assess the natural history of disease, we knocked in a familial, disease-associated SFTPC mutation, L188Q (L184Q [LQ] in mice), into the mouse Sftpc locus. Translation of the mutant proprotein, proSP-CLQ, exceeded that of proSP-CWT in neonatal alveolar type 2 epithelial cells (AT2 cells) and was associated with transient activation of oxidative stress and apoptosis, leading to impaired expansion of AT2 cells during postnatal alveolarization. Differentiation of AT2 to AT1 cells was also inhibited in ex vivo organoid culture of AT2 cells isolated from LQ mice; importantly, treatment with antioxidant promoted alveolar differentiation. Upon completion of alveolarization, SftpcLQ expression was downregulated, leading to resolution of chronic stress responses; however, the failure to restore AT2 cell numbers resulted in a permanent loss of AT2 cells that was linked to decreased regenerative capacity in the adult lung. Collectively, these data support the hypothesis that susceptibility to disease in adult LQ mice is established during postnatal lung development, and they provide a potential explanation for the delayed onset of disease in patients with familial pulmonary fibrosis. 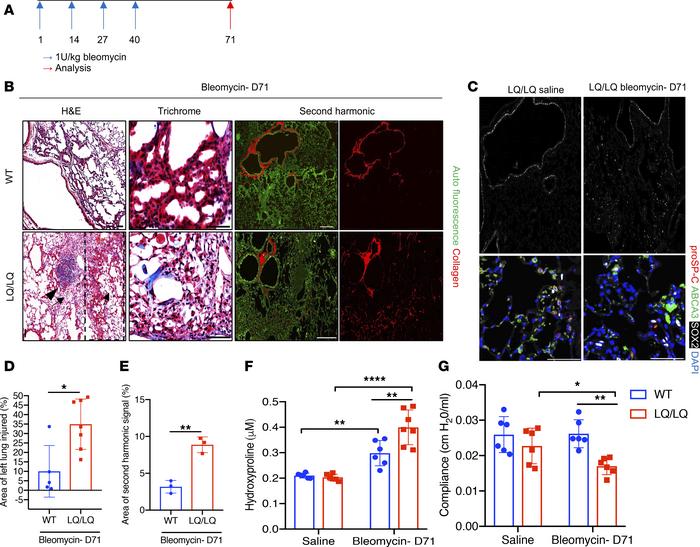