Glucagon-like peptide-1 (GLP-1) is an incretin hormone that potentiates glucose-stimulated insulin secretion. GLP-1 is classically produced by gut L cells; however, under certain circumstances α cells can express the prohormone convertase required for proglucagon processing to GLP-1, prohormone convertase 1/3 (PC1/3), and can produce GLP-1. However, the mechanisms through which this occurs are poorly defined. Understanding the mechanisms by which α cell PC1/3 expression can be activated may reveal new targets for diabetes treatment. Here, we demonstrate that the GLP-1 receptor (GLP-1R) agonist, liraglutide, increased α cell GLP-1 expression in a β cell GLP-1R–dependent manner. We demonstrate that this effect of liraglutide was translationally relevant in human islets through application of a new scRNA-seq technology, DART-Seq. We found that the effect of liraglutide to increase α cell PC1/3 mRNA expression occurred in a subcluster of α cells and was associated with increased expression of other β cell–like genes, which we confirmed by IHC. Finally, we found that the effect of liraglutide to increase bihormonal insulin+ glucagon+ cells was mediated by the β cell GLP-1R in mice. Together, our data validate a high-sensitivity method for scRNA-seq in human islets and identify a potentially novel GLP-1–mediated pathway regulating human α cell function. 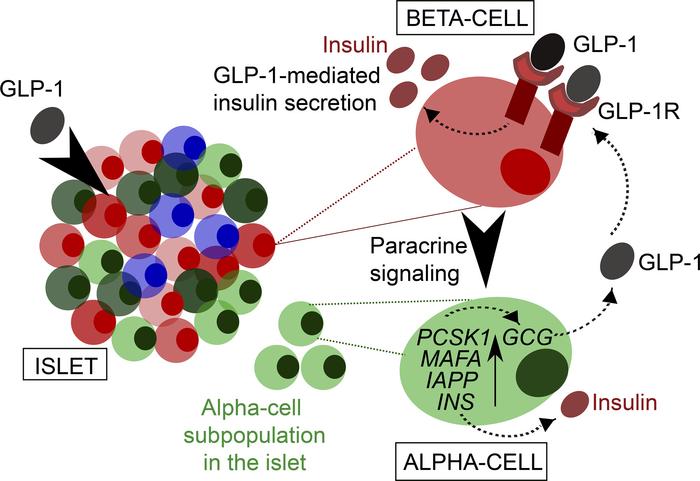