CD84 is a regulator of the immunosuppressive microenvironment in multiple myeloma

CD84 is a regulator of the immunosuppressive microenvironment in multiple myeloma

Multiple myeloma (MM) is characterized by an accumulation of malignant plasma cells (PCs) within the BM. The BM microenvironment supports survival of the malignant cells and is composed of cellular fractions that foster myeloma development and progression by suppression of the immune response. Despite major progress in understanding the biology and pathophysiology of MM, this disease is still incurable and requires aggressive treatment with significant side effects. CD84 is a self-binding immunoreceptor belonging to the signaling lymphocyte activation molecule (SLAM) family. Previously, we showed that CD84 bridges between chronic lymphocytic leukemia cells and their microenvironment, and it regulates T cell function. In the current study, we investigated the role of CD84 in MM. Our results show that MM cells express low levels of CD84. However, these cells secrete the cytokine macrophage migration inhibitory factor (MIF), which induces CD84 expression on cells in their microenvironment. Its activation leads to an elevation of expression of genes regulating differentiation to monocytic/granulocytic–myeloid-derived suppressor cells (M-MDSCs and G-MDSCs, respectively) and upregulation of PD-L1 expression on MDSCs, which together suppress T cell function. Downregulation of CD84 or its blocking reduce MDSC accumulation, resulting in elevated T cell activity and reduced tumor load. Our data suggest that CD84 might serve as a novel therapeutic target in MM. 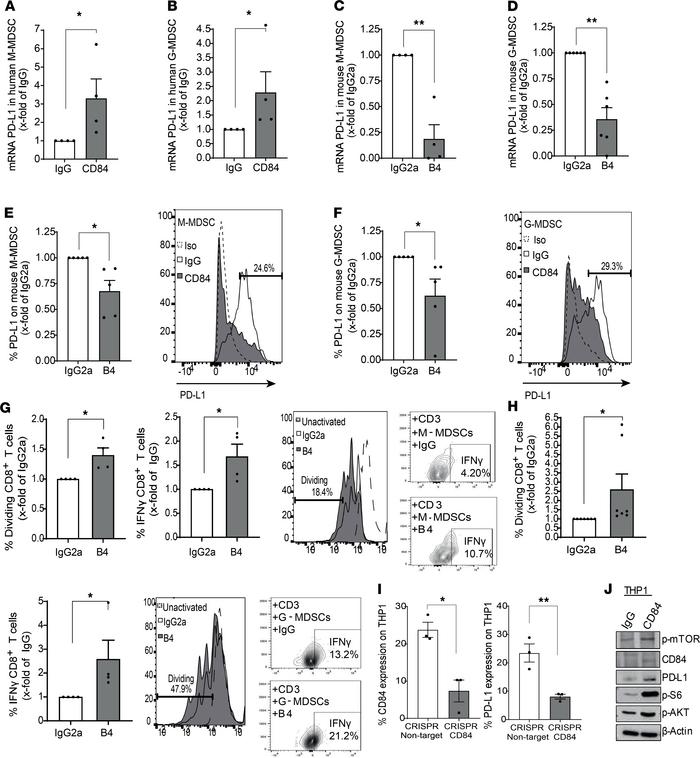