Subjects with obesity frequently have elevated serum vasopressin levels, noted by measuring the stable analog, copeptin. Vasopressin acts primarily to reabsorb water via urinary concentration. However, fat is also a source of metabolic water, raising the possibility that vasopressin might have a role in fat accumulation. Fructose has also been reported to stimulate vasopressin. Here, we tested the hypothesis that fructose-induced metabolic syndrome is mediated by vasopressin. Orally administered fructose, glucose, or high-fructose corn syrup increased vasopressin (copeptin) concentrations and was mediated by fructokinase, an enzyme specific for fructose metabolism. Suppressing vasopressin with hydration both prevented and ameliorated fructose-induced metabolic syndrome. The vasopressin effects were mediated by the vasopressin 1b receptor (V1bR), as V1bR-KO mice were completely protected, whereas V1a-KO mice paradoxically showed worse metabolic syndrome. The mechanism is likely mediated in part by de novo expression of V1bR in the liver that amplifies fructokinase expression in response to fructose. Thus, our studies document a role for vasopressin in water conservation via the accumulation of fat as a source of metabolic water. Clinically, they also suggest that increased water intake may be a beneficial way to both prevent or treat metabolic syndrome. 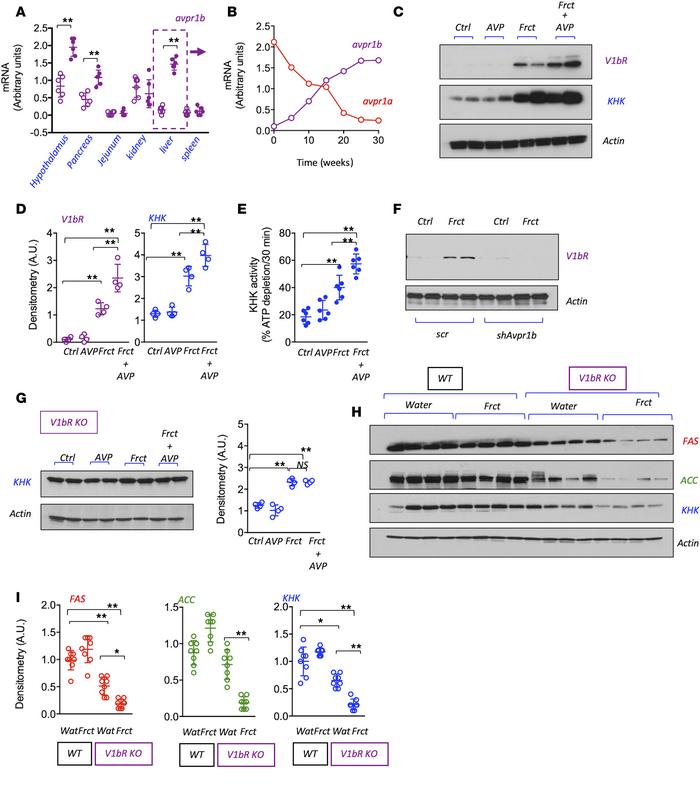