Cancer is caused primarily by genomic alterations resulting in deregulation of gene regulatory circuits in key growth, apoptosis, or DNA repair pathways. Multiple genes associated with the initiation and development of tumors are also regulated at the level of mRNA decay, through the recruitment of RNA-binding proteins to AU-rich elements (AREs) located in their 3′-untranslated regions. One of these ARE-binding proteins, tristetraprolin (TTP; encoded by Zfp36), is consistently dysregulated in many human malignancies. Herein, using regulated overexpression or conditional ablation in the context of cutaneous chemical carcinogenesis, we show that TTP represents a critical regulator of skin tumorigenesis. We provide evidence that TTP controlled both tumor-associated inflammation and key oncogenic pathways in neoplastic epidermal cells. We identify Areg as a direct target of TTP in keratinocytes and show that EGFR signaling potentially contributed to exacerbated tumor formation. Finally, single-cell RNA-Seq analysis indicated that ZFP36 was downregulated in human malignant keratinocytes. We conclude that TTP expression by epidermal cells played a major role in the control of skin tumorigenesis. 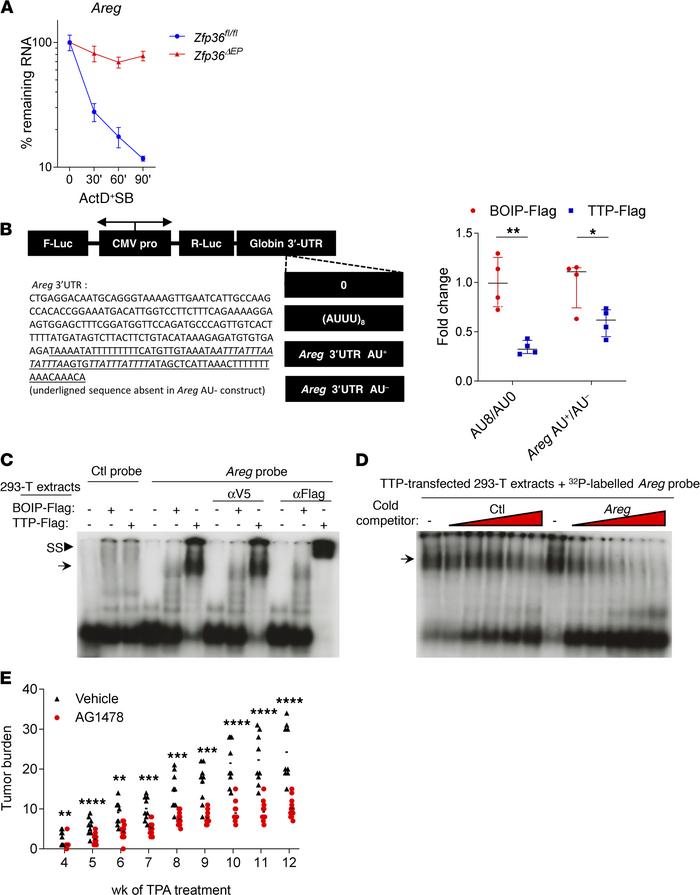 () Primary keratinocytes isolated from or newborns were stimulated with TPA (100 ng/mL) for 2 hours prior to actinomycin D (10 μg/μl) and SB202190 (1 μM) treatment for the indicated time. Half-life of mRNA mRNA was quantified by qPCR and normalized by mRNA levels at t0 (mean ± SEM, = 3–4, representative out of 2 experiments). () Schematic representation of the dual-reporter plasmids generated to assess the role of the ARE elements: 3’UTR of mRNA with (AU+) or without (AU-) ARE was inserted behind the sequence coding for luciferase (R-Luc). Fold change between the Rluc/Fluc ratio of AU+ and AU- luciferase signals from dual-reporter plasmids cotransfected with TTP-Flag (or BOIP-Flag as control) in HEK293T cells (mean ± SEM, representative out of 7 experiments). () Electrophoretic mobility supershift assay. Extracts from HEK293T cells transiently transfected with TTP-Flag or BOIP-Flag were incubated with a 32P-labeled probe of ARE or a CTRL probe corresponding to pBS polylinker and no antibody, an α-V5, or an α-Flag antibody before migration.() 32P-labeled Areg probe mixed with increasing molar excess of unlabeled Areg probe or pBS control probe was used to performed EMSA competition experiment. ( and ) Results are representative of 3 independent experiments. () mice were treated with DMBA/TPA, and 45 minutes before each application of TPA, mice were treated with the EGFR inhibitor AG1478 (500 μg/mL) or vehicle. Mice were monitored for 12 weeks at weekly intervals for tumor development ( = 8–13, representative of 2 experiments). Statistical significance (* < 0.05, ** < 0.01, *** < 0.001, **** < 0.0001) was assessed by 2-way ANOVA () and 2-tailed Mann-Whitney test (). TTP, tristetraprolin; DMBA, 7,12-dimethylbenz[a]anthracene; TPA, 12-0-tetradecanoylphorbol-13-acetate; ARE, AU-rich element; pBS, pBluscript polylinker region.