The creatine transporter (CrT) maintains brain creatine (Cr) levels, but the effects of its deficiency on energetics adaptation under stress remain unclear. There are also no effective treatments for CrT deficiency, the second most common cause of X-linked intellectual disabilities. Herein, we examined the consequences of CrT deficiency in brain energetics and stress-adaptation responses plus the effects of intranasal Cr supplementation. We found that CrT-deficient (CrT–/y) mice harbored dendritic spine and synaptic dysgenesis. Nurtured newborn CrT–/y mice maintained baseline brain ATP levels, with a trend toward signaling imbalance between the p-AMPK/autophagy and mTOR pathways. Starvation elevated the signaling imbalance and reduced brain ATP levels in P3 CrT–/y mice. Similarly, CrT–/y neurons and P10 CrT–/y mice showed an imbalance between autophagy and mTOR signaling pathways and greater susceptibility to cerebral hypoxia-ischemia and ischemic insults. Notably, intranasal administration of Cr after cerebral ischemia increased the brain Cr/N-acetylaspartate ratio, partially averted the signaling imbalance, and reduced infarct size more potently than intraperitoneal Cr injection. These findings suggest important functions for CrT and Cr in preserving the homeostasis of brain energetics in stress conditions. Moreover, intranasal Cr supplementation may be an effective treatment for congenital CrT deficiency and acute brain injury. 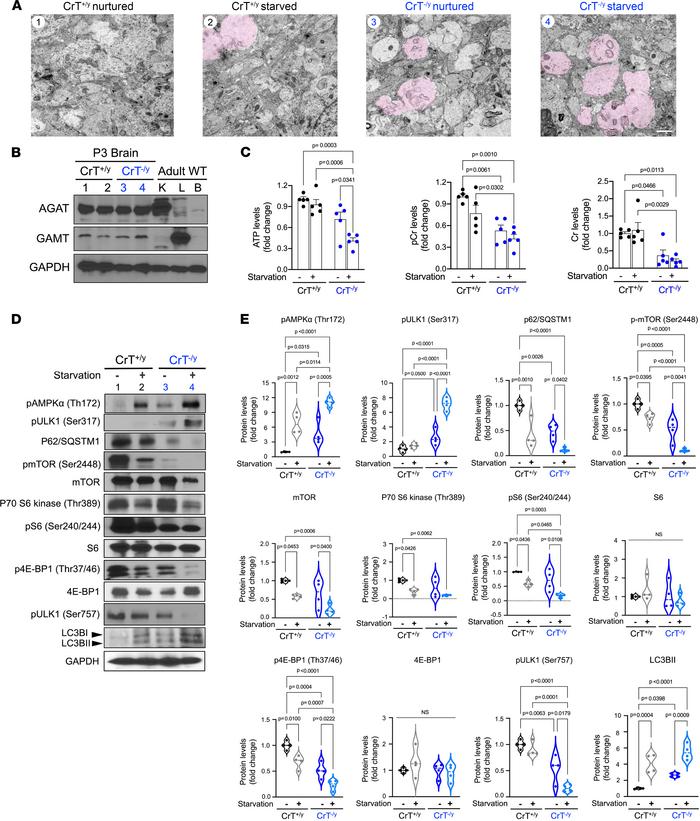 () EM showed more membrane whorls (arrows) and large lucid cytoplasm (pink-colored) in the neocortical neuropil of 3-day-old CrT–/y mice, particularly after 12 hours of starvation/separation from the dam ( = 3 for each condition). The numbering 1–4 for the indicated condition is used in all panels of this figure. Scale bar: 1 μm. () Immunoblot detection of AGAT and GAMT in P3 CrT+/y and CrT–/y mice ( > 3 for each). Note the expression of AGAT and GAMT in P3 mouse brains with or without starvation, but not in the adult brain. () LC-MS measurement of the brain ATP, Cr, and PCr levels in P3 CrT+/y and CrT–/y neonates with or without starvation ( = 5 for each group). ( and ) Immunoblotting analysis and quantification of the p-AMPK/autophagy and mTOR signaling pathways in P3 CrT+/y and CrT-/y mouse brains, with or without starvation as indicated ( = 4 for each). The violin plots in are representative of 3 independent experiments, with = 4 biological replicates; all other data are shown as mean ± SEM. All statistical analyses were performed using 2-way ANOVA followed by Tukey’s multiple comparison post hoc test.