Spiral ganglion neurons (SGNs) are primary auditory neurons in the spiral ganglion that transmit sound information from the inner ear to the brain and play an important role in hearing. Impairment of SGNs causes sensorineural hearing loss (SNHL), and it has been thought until now that SGNs cannot be regenerated once lost. Furthermore, no fundamental therapeutic strategy for SNHL has been established other than inserting devices such as hearing aids and cochlear implants. Here we show that the mouse spiral ganglion contains cells that are able to proliferate and indeed differentiate into neurons in response to injury. We suggest that SRY-box transcription factor 2/SRY-box transcription factor 10–double-positive (Sox2/Sox10–double-positive) Schwann cells sequentially started to proliferate, lost Sox10 expression, and became neurons, although the number of new neurons generated spontaneously was very small. To increase the abundance of new neurons, we treated mice with 2 growth factors in combination with valproic acid, which is known to promote neuronal differentiation and survival. This treatment resulted in a dramatic increase in the number of SGNs, accompanied by a partial recovery of the hearing loss induced by injury. Taken together, our findings offer a step toward developing strategies for treatment of SNHL.

GFs enhance the proliferation of new SGN precursors after injury. 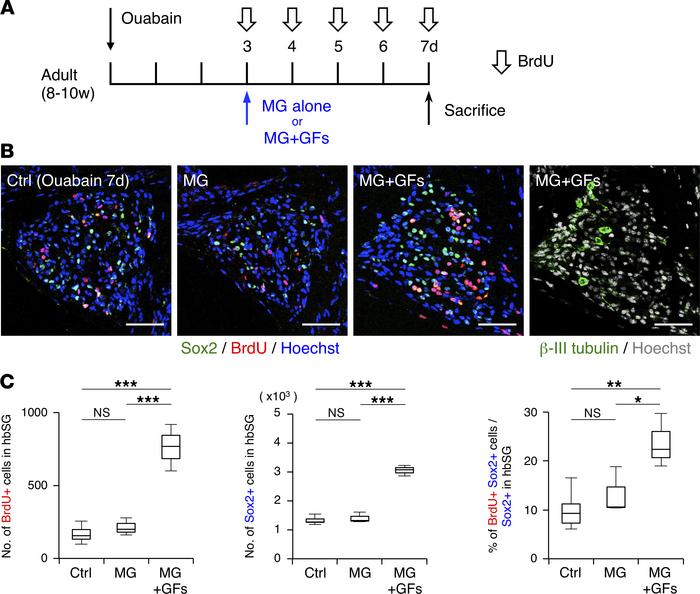 () Experimental scheme to examine the effect of GFs on proliferation of cells in the injured SG. BrdU was injected intraperitoneally at 50 mg/kg every day on days 3 to 7. Ctrl is SG of mice without reoperation and sacrificed on day 7 after ouabain administration. To examine the effect of Matrigel (MG), we compared MG alone and MG+GFs; in both treatments mice were reoperated on day 3 and sacrificed on day 7. () Representative images of the indicated marker-positive cells in Ctrl, MG alone–, and MG+GF–treated SGs on day 7 after ouabain administration. (Scale bars, 50 μm.) () Quantification of the number of BrdU- and Sox2-positive cells, and the proportion of BrdU/Sox2–double-positive cells among Sox2-positive cells, per hbSG of Ctrl, MG alone, and MG+GF mice on day 7 after ouabain administration ( = 3 animals each; error bars are mean ± SEM; * ≤ 0.05, ** ≤ 0.01, *** ≤ 0.001; 1-way ANOVA and Tukey’s multiple-comparison test).