A8 inhibits A4-mediated LPL degradation by interacting with A4. 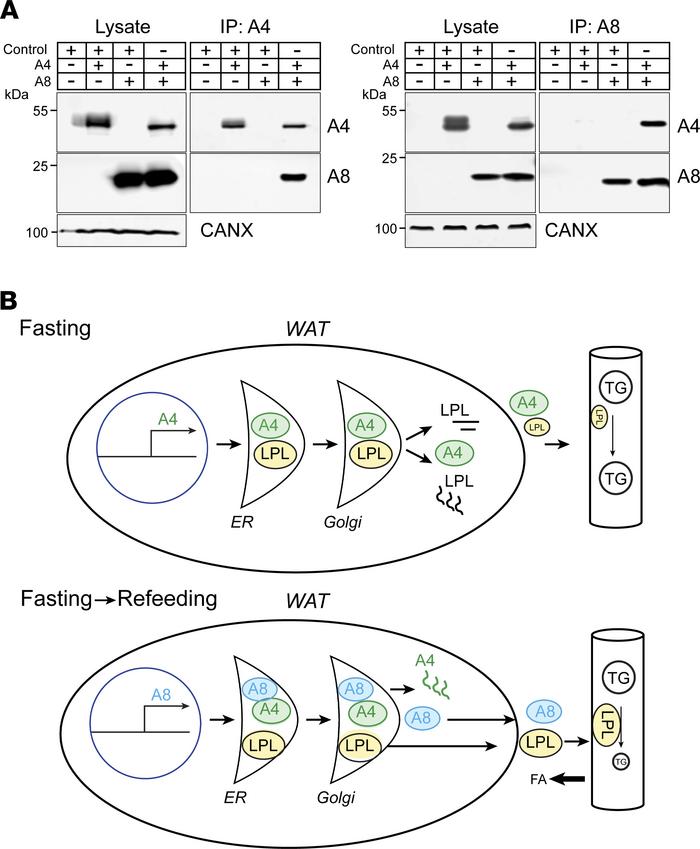 () A8 physically interacts with A4 in QBI-293 cells. Recombinant A4-Myc and A8-Flag were coexpressed in QBI-293 cells alone (with empty plasmid) or together. A4 was immunoprecipitated using Myc-linked magnetic beads (left panel), and A8 was immunoprecipitated using Flag magnetic beads (right panel) as described in the Methods. As A4 has nonspecific binding to magnetic beads, Flag beads were eluted using 3× Flag peptide. Immunoblot analysis using anti-A4 (top), anti-A8 (middle), and anti-calnexin antibodies was performed using 30 μg of lysate (input) as described in Methods. () Schematic model of A4, A8, and LPL expression in WAT from fasted (top) and refed (bottom) mice. After a 15-hour fast, no A8 is present in the adipose tissue of WT mice whereas levels of expression of A4 are high. A4 expression promotes degradation of LPL. As a consequence, circulating lipoproteins bypass WAT and deliver TGs to oxidative tissues (top). In the fasting to feeding transition, A8 expression rises as levels of A4 slowly fall. A8 interacts with A4, thus sparing LPL from A4-stimulated intracellular degradation. LPL is now available to hydrolyze circulating lipoprotein-TGs and thus replete TG stores in adipose tissue when food is available.