Establishing the interactome of the cancer-associated stress protein Nuclear Protein 1 (NUPR1), we found that it binds to several hundreds of proteins, including proteins involved in nuclear translocation, DNA repair, and key factors of the SUMO pathway. We demonstrated that the NUPR1 inhibitor ZZW-115, an organic synthetic molecule, competes with importins for the binding to the NLS region of NUPR1, thereby inhibiting its nuclear translocation. We hypothesized, and then proved, that inhibition of NUPR1 by ZZW-115 sensitizes cancer cells to DNA damage induced by several genotoxic agents. Strikingly, we found that treatment with ZZW-115 reduced SUMOylation of several proteins involved in DNA damage response (DDR). We further report that the presence of recombinant NUPR1 improved the SUMOylation in a cell-free system, indicating that NUPR1 directly stimulates the SUMOylation machinery. We propose that ZZW-115 sensitizes cancer cells to genotoxic agents by inhibiting the nuclear translocation of NUPR1 and thereby decreasing the SUMOylation-dependent functions of key proteins involved in the DDR.

ZZW-115 strongly potentiated the antitumoral activity of on PDAC genotoxic agents in vivo. 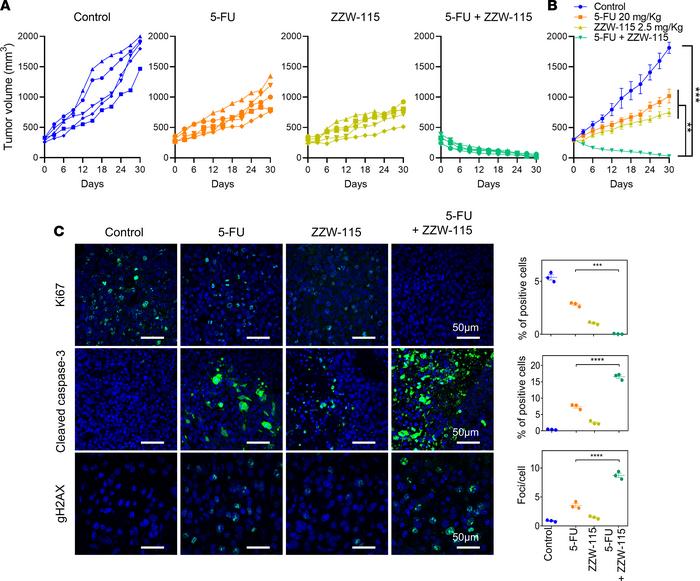