Systemic sclerosis (SSc) is a heterogeneous autoimmune disorder that results in skin fibrosis, autoantibody production, and internal organ dysfunction. We previously identified 4 “intrinsic” subsets of SSc based upon skin gene expression that are found across organ systems. Gene expression regulators that underlie the SSc-intrinsic subsets, or are associated with clinical covariates, have not been systematically characterized. Here, we present a computational framework to calculate the activity scores of gene expression regulators and identify their associations with SSc clinical outcomes. We found that regulator activity scores can reproduce the intrinsic molecular subsets, with distinct sets of regulators identified for inflammatory, fibroproliferative, limited, and normal-like samples. Regulators most highly correlated with modified Rodnan skin score (MRSS) also varied by intrinsic subset. We identified subgroups of patients with fibroproliferative and inflammatory SSc with more severe pathophenotypes, such as higher MRSS and increased likelihood of interstitial lung disease (ILD). Using an independent cohort, we show that the group with more severe ILD was more likely to show forced vital capacity decline over a period of 36–54 months. Our results demonstrate an association among the activation of regulators, gene expression subsets, and clinical variables that can identify patients with SSc with more severe disease.

Overview of computational workflow in this study. 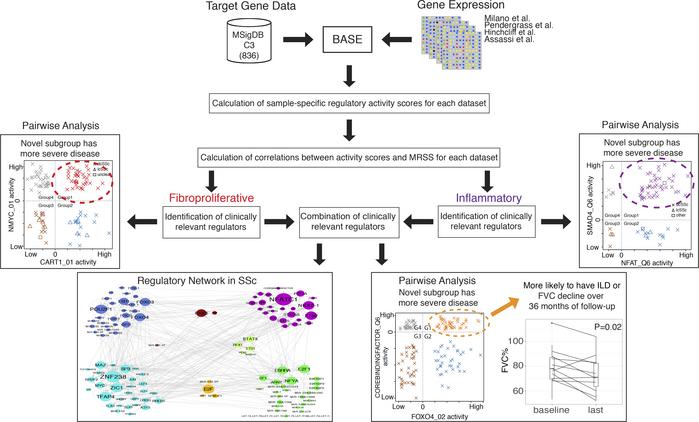 Briefly, by integrating target gene lists and gene expression of patients with SSc, we calculated sample-specific regulatory activity scores for each data set. Then, by calculating the correlations between activity scores and MRSS, fibroproliferative and inflammatory associated regulators were identified. Using those regulators, we further identified subgroups of patients in a given intrinsic subset, built a regulatory network in the context of SSc, and identified possibly novel subgroups of patients with SSc who are more like to have ILD or FVC decline over 36 months of follow-up.