Imprinted genes are highly expressed in the hypothalamus; however, whether specific imprinted genes affect hypothalamic neuromodulators and their functions is unknown. It has been suggested that Prader–Willi syndrome (PWS), a neurodevelopmental disorder caused by lack of paternal expression at chromosome 15q11–q13, is characterized by hypothalamic insufficiency. Here, we investigate the role of the paternally expressed Snord116 gene within the context of sleep and metabolic abnormalities of PWS, and we report a significant role of this imprinted gene in the function and organization of the 2 main neuromodulatory systems of the lateral hypothalamus (LH) — namely, the orexin (OX) and melanin concentrating hormone (MCH) — systems. We observed that the dynamics between neuronal discharge in the LH and the sleep-wake states of mice with paternal deletion of Snord116 (PWScrm+/p–) are compromised. This abnormal state–dependent neuronal activity is paralleled by a significant reduction in OX neurons in the LH of mutant mice. Therefore, we propose that an imbalance between OX- and MCH-expressing neurons in the LH of mutant mice reflects a series of deficits manifested in the PWS, such as dysregulation of rapid eye movement (REM) sleep, food intake, and temperature control.

and play roles in the formation and maintenance of OX neurons. 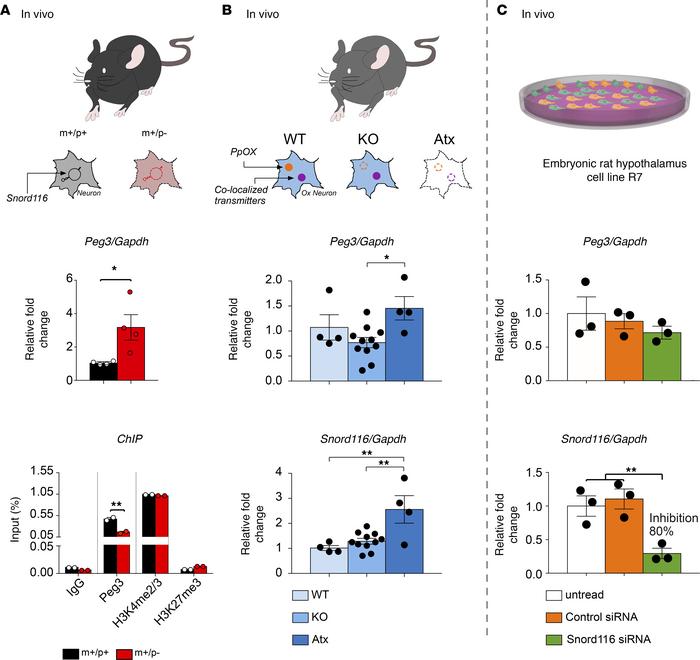