Immunologic timeline of Ebola virus disease and recovery in humans

Immunologic timeline of Ebola virus disease and recovery in humans

A complete understanding of human immune responses to Ebola virus infection is limited by the availability of specimens and the requirement for biosafety level 4 (BSL-4) containment. In an effort to bridge this gap, we evaluated cryopreserved PBMCs from 4 patients who survived Ebola virus disease (EVD) using an established mass cytometry antibody panel to characterize various cell populations during both the acute and convalescent phases. Acute loss of nonclassical monocytes and myeloid DCs, especially CD1c+ DCs, was noted. Classical monocyte proliferation and CD38 upregulation on plasmacytoid DCs coincided with declining viral load. Unsupervised analysis of cell abundance demonstrated acute declines in monocytic, NK, and T cell populations, but some populations, many of myeloid origin, increased in abundance during the acute phase, suggesting emergency hematopoiesis. Despite cell losses during the acute phase, upregulation of Ki-67 correlated with recovery of cell populations over time. These data provide insights into the human immune response during EVD. 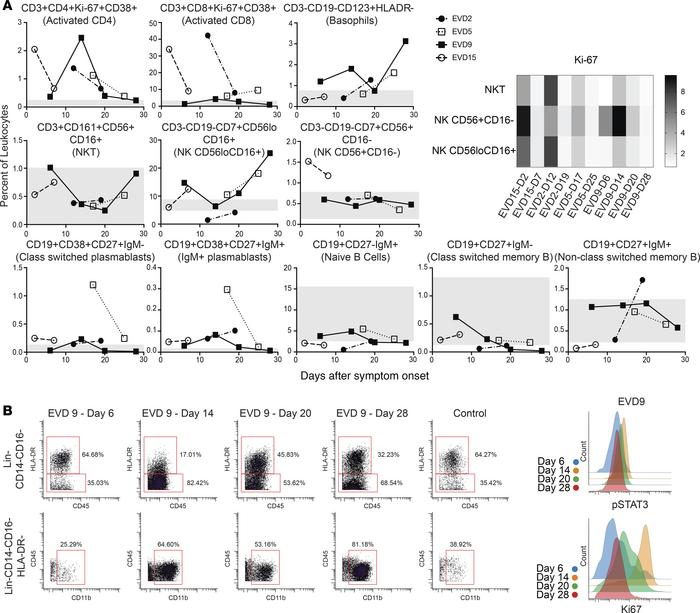 () Frequencies of T cells, B cells, basophils, and NK cells as a percentage of CD45+CD66– leukocytes in patients compared with normal healthy controls (range for all controls in gray). Fold increase in median Ki-67 signal as compared with that in a control population is shown for NK and NKT cells at each patient time point. D2, day 2. () The expanded Lin–CD14–CD16–HLA-DR– but CD11b+ population that was noted in EVD9 is shown, with histograms demonstrating pSTAT3 and Ki-67 expression in these cells.