Alveolar macrophages (AM) play a central role in initiation and resolution of lung inflammation, but the integration of these opposing core functions is poorly understood. AM expression of cholesterol 25-hydroxylase (CH25H), the primary biosynthetic enzyme for 25-hydroxycholesterol (25HC), far exceeds the expression of macrophages in other tissues, but no role for CH25H has been defined in lung biology. As 25HC is an agonist for the antiinflammatory nuclear receptor, liver X receptor (LXR), we speculated that CH25H might regulate inflammatory homeostasis in the lung. Here, we show that, of natural oxysterols or sterols, 25HC is induced in the inflamed lung of mice and humans. Ch25h–/– mice fail to induce 25HC and LXR target genes in the lung after LPS inhalation and exhibit delayed resolution of airway neutrophilia, which can be rescued by systemic treatment with either 25HC or synthetic LXR agonists. LXR-null mice also display delayed resolution, suggesting that native oxysterols promote resolution. During resolution, Ch25h is induced in macrophages upon their encounter with apoptotic cells and is required for LXR-dependent prevention of AM lipid overload, induction of Mertk, efferocytic resolution of airway neutrophilia, and induction of TGF-β. CH25H/25HC/LXR is, thus, an inducible metabolic axis that programs AMs for efferocytic resolution of inflammation.

is induced by LPS in macrophages of murine and human lung. 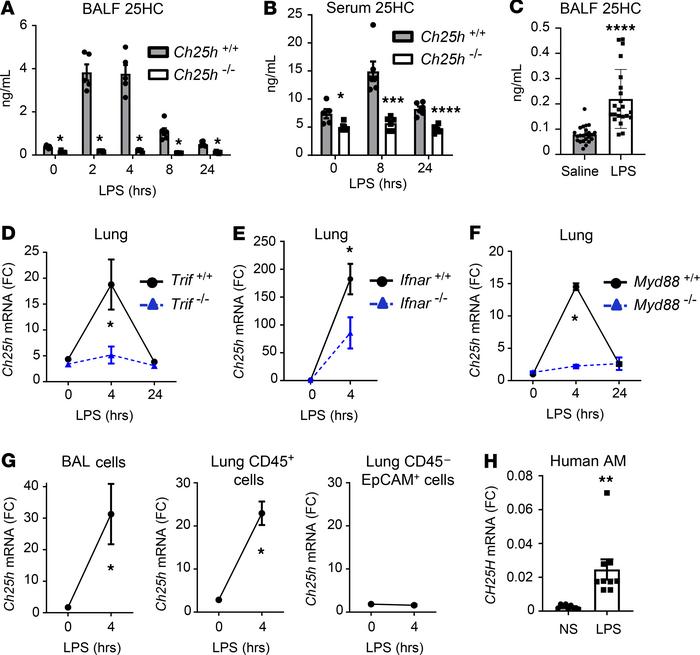 ( and ) BALF () and serum 25HC () was quantified by liquid chromatography–mass spectrometry (LC-MS) at the indicated time points following LPS inhalation in +/+ and –/– mice ( = 5–7/genotype/time point). () BALF 25HC was quantified 16 hours following contralateral subsegmental bronchoscopic instillation of saline and LPS into human volunteers ( = 23) () Lung tissue mRNA (fold change [FC], normalized to and indexed to WT/control) was quantified by quantitative PCR (qPCR) at various times after LPS inhalation in the murine strains indicated ( = 5/genotype/time point). () mRNA (-normalized) was quantified in BAL cells, and in CD45+ and CD45–EpCAM+ cells from WT lung parenchyma at the indicated times in relation to LPS inhalation ( = 3/genotype/time point). () Alveolar macrophages (AM) collected from BAL of normal, healthy human controls ( = 3) were exposed ex vivo to LPS (10 ng/mL, 4 hours) or left nonstimulated (NS) and then assayed by qPCR for normalized mRNA. Data are mean ± SEM and are representative of 2–3 independent experiments. * < 0.05; ** < 0.01; **** < 0.0001 by unpaired test.