C5a impairs phagosomal maturation in the neutrophil through phosphoproteomic remodeling

C5a impairs phagosomal maturation in the neutrophil through phosphoproteomic remodeling

Critical illness is accompanied by the release of large amounts of the anaphylotoxin, C5a. C5a suppresses antimicrobial functions of neutrophils which is associated with adverse outcomes. The signaling pathways that mediate C5a-induced neutrophil dysfunction are incompletely understood. Healthy donor neutrophils exposed to purified C5a demonstrated a prolonged defect (7 hours) in phagocytosis of Staphylococcus aureus. Phosphoproteomic profiling of 2712 phosphoproteins identified persistent C5a signaling and selective impairment of phagosomal protein phosphorylation on exposure to S. aureus. Notable proteins included early endosomal marker ZFYVE16 and V-ATPase proton channel component ATPV1G1. An assay of phagosomal acidification demonstrated C5a-induced impairment of phagosomal acidification, which was recapitulated in neutrophils from critically ill patients. Examination of the C5a-impaired protein phosphorylation indicated a role for the PI3K VPS34 in phagosomal maturation. Inhibition of VPS34 impaired neutrophil phagosomal acidification and killing of S. aureus. This study provides a phosphoproteomic assessment of human neutrophil signaling in response to S. aureus and its disruption by C5a, identifying a defect in phagosomal maturation and mechanisms of immune failure in critical illness. 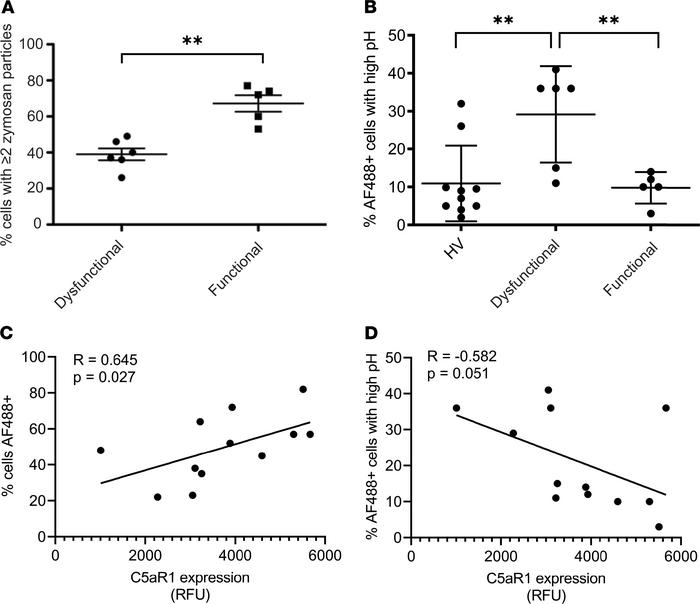 () Neutrophils purified from critically ill patients were exposed to zymosan (5 μg/mL) and allowed to phagocytose for 30 minutes as described in Methods and classified as functional or dysfunctional based on a cutoff of 50% of cells phagocytosing greater than or equal to 2 zymosan particles as previously described (, ). Data are shown as mean plus or minus SD for = 6 patients with dysfunctional neutrophils and 5 patients with functional neutrophils respectively. ** = 0.004 by Mann-Whitney test. () Neutrophil phagosomal acidification was assessed in whole blood from critically ill patients using the maturation probe as previously described. Patients were classed as dysfunctional using the assay from . Data are shown as mean plus or minus SD = 6 patients with dysfunctional neutrophils, 5 patients with functional neutrophils, and 10 healthy controls, respectively. = 0.04 by 1-way ANOVA. ** < 0.01 by Holm-Šidák’s test of multiple comparisons. ( and ) C5aR1 expression was assessed by flow cytometry and correlated (Spearman) with phagocytosis () and phagosomal acidification () for = 12 patients. NB: One patient’s cells did not adhere to tissue culture plastic for the zymosan assay, and thus they could not be assigned to dysfunctional or nondysfunctional groups shown in and . C5aR1 expression and maturation probe data was available to allow inclusion in correlation analyses in and and hence the difference in numbers between these figures.